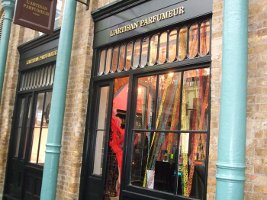 Over the last year or so, L’Artisan Parfumeur have been gradually closing down their standalone stores in London. There are no longer stores in Marylebone High Street or Royal Exchange, and the third store in Cale Street will soon go too, I learned. Presumably this is linked to the fact that L’Artisan is now stocked by SpaceNK, which gives them a broader distribution without the overhead of London premises.

However, there is still one L’Artisan shop still in London for now — the newish store in Covent Garden. It’s in the space left vacant by the demise of B Never Too Busy To Be Beautiful, or rather in the upper half of that space — the space is shared with another business that gets the intriguing caverned cellar downstairs.

It’s very useful to have a dedicated L’Artisan boutique. The problem with the SpaceNK arrangement is a lack of space to carry the full range. Many SpaceNK stores will sell only four or five L’Artisan scents, and I doubt if any carry the whole line in-store. The Covent Garden shop does carry all the scents, plus candles and other scented products. (Note: for newest L’Artisan releases, Liberty seems to be the best bet — they had Coeur de Vétiver Sacré before the L’Artisan shop.)

It’s not as large a space as the other L’Artisan stores, and you have to wonder how long it will last there, but for now it’s as welcome addition to the Covent Garden shopping experience. 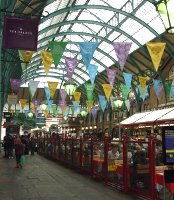 Nearby: Covent Garden is a joyous place to spend an afternoon — lovely shops, lots of street entertainment, cafes and restaurants. It’s a good place to visit on a wet day, as the main market area is under a glass roof.

While you’re there, it’s important not to miss the Royal Opera House, where you can wander round gawping at the new glass spaces and perhaps indulge in a superbly glam lunch. I believe they also do backstage tours. London being as compact as it is, you’re only ten minutes walk from the National Gallery and the National Portrait Gallery, both unmissable.

Nearest tube station: Covent Garden, although you’re also less than ten minutes walk from Charing Cross rail station, which might save you a tube ticket.