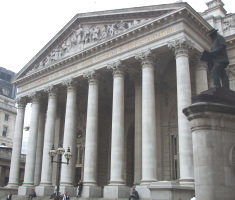 Shopping in London is all about the West End — Mayfair, Westminster, Knightsbridge and Chelsea. The City of London proper (i.e., the historic core of Greater London) is all about money; it’s a maze of narrow medieval alleys with huge office buildings, endless posh banking headquarters, and men….lots and lots and lots of men, most of them in sharp suits with cell phones pressed to their ears. There’s a plethora of expensive little shops selling shirts, ties, and, of course, those sharp suits.

However, some unexpectedly excellent perfume shopping can be found in the City, and one of the best places is right next to the Bank of England — the Royal Exchange.

This is a grand City building, built in 1844 as a centre of commerce, with Corinthian columns and a bright inner courtyard (shown below). Nowadays, all the commerce is done electronically, and the building has been given over to retail of luxury goods. The central court is now a grand café/bar, the interior is lined with jewellery stores, and the exterior is occupied by designer boutiques and other luxe retailers.

Inside, the jewellers usually (though not always) offer their perfume ranges where they have them. Among these are Paul Smith, Theo Fennell and Tiffany & Co. There’s a Chanel jewellery boutique which, sadly, doesn’t carry scents.

There’s a pleasant garden area outside for sitting/sandwich eating while you let your sprayed arms ‘settle’. 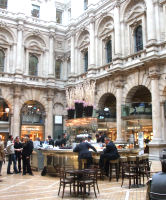 Getting there: Royal Exchange, between Cornhill and Threadneedle Street, London EC3. Website.

Nearby: The Bank of England, right next door! You’re really in the heart of the City here.

Don’t miss: St. Mary Woolnoth Church, just round the corner on Lombard Street, one of the churches that featured in Peter Ackroyd’s novel Hawksmoor as the setting for a grisly murder.