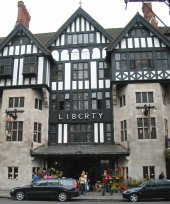 Liberty has to be the prettiest store in London. The first time you turn off Regent Street and see that mad Tudor frontage, it’s almost impossible not to laugh out loud. In the midst of all the stately Georgian architecture in this part of central London, Liberty looks like a joke played on the city by the Disney Corporation.

In some ways it is, except the joker wasn’t Walt but a chap called Arthur Lasenby Liberty, who had the store built in 1924. So, not Tudor at all! It was created using the timbers of two ships, the HMS Impregnable and the HMS Hindustan, and the length of the Great Marlborough Street frontage is apparently the same as that of the Hindustan.

Inside, the store is even more impressive. Arthur Liberty wanted to have his customers feel as if they were walking round their own homes (this tells you something about the kind of customers he had), so the store was arranged as small rooms round three galleried lightwells. The place gleams with carved panelling; it’s a bit like walking round a stately home where you’re actually allowed to pick up the exhibits.

There used to be a large and airy perfume/cosmetics space in the Regent Street part of the store (there are two buildings linked by bridges), but a couple of years ago this space was sold/rented off, and the perfume department squeezed into a much smaller space behind the beauty hall. Sadly, this move seems to have forced a reduction in the range — I didn’t spot the Guerlains that they used to stock. No more Demeters either, alas.

However, they do have a number of lines which are hard to find elsewhere, including one fragrance which is exclusive to Liberty (Miller Harris Rose en Noir), and it’s the only department store to stock the full range of Comme des Garçons. Even better for the perfume lover, in mid October a new Le Labo area will open! The salesperson I spoke to was very excited about this, and had been sent on a training course even though he would not be staffing the counter. 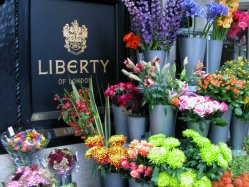 Liberty, with its chambered layout, is one of the most pleasant shopping experiences in London — not to be missed whether you’re into shopping or not. As in…even a husband who has been dragged around everywhere else and just wishes your credit card would explode, couldn’t fail to be charmed and impressed.

Don’t miss: The fabric hall, full of the famous Liberty prints. The second floor collection of beautiful stoppered bottles. The lifts, which are panelled in dark wood.

Nearby: The London Palladium (a major theatre) is on Argyll Street. You mustn’t miss Hamleys, one of the world’s largest toy shops, which is just round the corner from Liberty on Regent Street. And if you’re into fashion, the Top Shop flagship store is minutes away on Oxford Circus. 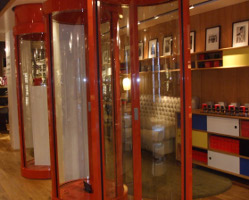