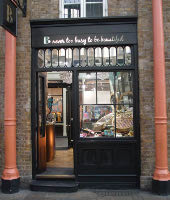 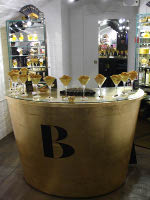 B Never Too Busy To Be Beautiful (the staff call it ‘B’, a habit which I’ll gratefully adopt here), is the sister company to Lush, and takes the same stringent no-animal-testing approach to the goods it sells.

Where Lush concentrates on soap and bath products, B is mainly about makeup and scent. There’s the same whimsical quality to the names of the products, but the experience is much more glittery and girly.

There are currently two ‘B’ shops in London — one in Oxford Street and the one I visited, which is in Covent Garden.

Covent Garden, as you probably know, used to be London’s main fruit and vegetable market, before trade was transferred to New Covent Garden in 1974, and the original glass-covered building — designed in 1632 by Inigo Jones — converted into an upmarket shopping area with several arcades. These are full of boutiques and jewellery stores, with lots of cute cafes in the glass covered spaces.

B is mainly underground; at first glance it looks as if there’s a relatively modest floor area at ground level. However, go downstairs and you find yourself in a much larger vaulted space — essentially the cellars of the original building.

B sells a range of their own cutely named scents, such as ‘Breath of God’ and ‘1000 Kisses Deep’. There’s a curved bar with cocktail glasses containing dried flowers scented with each of the fragrances (see image top right), and a range of crystal atomisers in which the scents can be dispensed. All of the perfumes are sold in small handbag sized sprays (9g) as well as larger bottles. 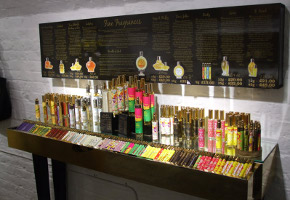 In addition to the scents, there are ranges of toiletries, including a man’s line called ‘Dirty’ (packaged to look like squirty mayonnaise and kitchen spray), candles in silver holders, and lots of makeup in glittered containers. There’s a rather unusual range of bright mascaras, and some beautiful sequined brushes. It’s girly heaven!

Nearest tube station: Covent Garden, although you’re also less than ten minutes walk from Charing Cross rail station, which might save you a tube ticket.

Nearby: Next door to Covent Garden is…Covent Garden! Or rather, the Royal Opera House, which has always been known as Covent Garden although technically it’s really on Bow Street. You can wander round the side and look in at the wardrobe department, which is rather fun. Attending an actual performance means saving up many pennies and probably foregoing a Chanel Exclusif or three.

Don’t miss: Covent Garden is the only place in London which has a street entertainment licence, so it’s usually alive with performers (every day except Christmas Day); thirty million visitors come to view every year. Don’t stub your cigarette out on a venerable statue…it will probably yelp…

Update: the B Never Too Busy brand folded in late 2009.