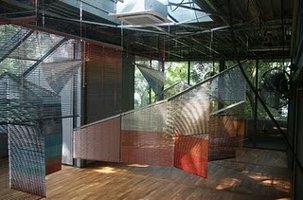 A new exhibit by artist Haegue Yang "must be smelled to be believed":

The New Museum will present the first New York solo exhibition by Haegue Yang (b. Seoul, 1971). One of the leading artists of her generation, Yang has participated in numerous exhibitions internationally, and represented South Korea at the 53rd Venice Biennial in 2009, but she has yet to exhibit in a New York museum. “Voice and Wind: Haegue Yang,” at the New Museum will feature the artist’s installation Series of Vulnerable Arrangements—Voice and Wind (2009)—a labyrinthine system of stacked venetian blinds, industrial fans, and scent atomizers that will transform the New Museum’s lobby gallery into an immersive experience.

The New Museum is at 235 Bowery and the exhibit runs through 23 January.