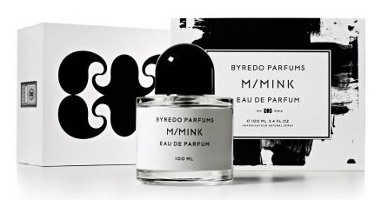 How you feel about Byredo M/Mink Eau de Parfum might depend on your thoughts about Dada clothing — say, Elsa Schiaparelli's shoe hat.1 The hat is awfully clever. Who would have thought to take something you wear on your feet, flip it heel up, and put it on your head? But the hat isn't particularly flattering, and, face it, when you wear a shoe on your head, people notice the shoe and little else. Schiaparelli called herself an artist, but some may have thought of her hat less as art than as gimmick. I'll let you decide where M/Mink falls.

M/Mink is a collaboration between Byredo and a French design firm called M/M, after its founders, Michael Amzalag and Mathias Augustyniak. In a press release, M/M says:

In 2009, reversing the usual idea of receiving a brief from a client, they invited Ben Gorham of byredo to their studio in Paris and presented him a creative direction and concept — a block of solid ink purchased in Asia, a photograph showing a Japanese master practising his daily calligraphy, and a large utopian formula that Mathias drew on Korean traditional paper.

It is rare in our days to find objects with a soul that perfectly fits in the trivial world we’re living in. Even though perfume is totally useless, these seemed to fulfill a kind of spiritual function[...]

Ben returned to Sweden and came back to Paris seven months later with a scent. This was his translation of the three images he was given. When we tried his proposal, we truly wanted to call it a smell. A smell as in Smells Like Teen Spirit like Nirvana used to sing.

(Note: Ben Gorham is the founder of Byredo. For brevity, I cut out bits of the press release, which you can find in full here. Let me add, I believe for the observant our world is tragic and beautiful, not trivial. Unless you're making irrelevant references to Nirvana, that is. And don't even get me started on "perfume is totally useless.")

M/Mink was developed by perfumer Jerome Epinette. Its notes include adoxal, incense, patchouli, honey, and amber. Adoxal is a synthetic compound that in the right dilution smells something like lily of the valley. In M/Mink, it is concentrated enough to stick on the tongue, like the eyedroppers of echinacea I used to take when I thought I might be getting a cold. This must be the smell of a block of ink. The sharp, plastic note, as intense as an electrical fire, burns through most of M/Mink's life on skin — at least three hours.

Gradually, incense, wood, and amber take the edge off the ink accord, but they never surface insistently enough to be a distinct presence. As the fragrance ages, Byredo compares M/Mink's scent to blood. It is metallic, but not as sweet as blood. But then, I haven't smelled a lot of blood.

All in all, M/Mink is sort of a novelty fragrance, but a joke that likely only you will get. Unlike with Schiaparelli's shoe hat, not many people will recognize M/Mink as ink. Instead, they might cast quick glances at electrical outlets to make sure nothing has shorted out. But similar to the shoe hat, M/Mink is only marginally wearable. It isn't flattering or even enjoyable. A discrete dab while you're working might be a fun, private boost for its inky reminders. I spend plenty of time writing at my laptop, and I'd appreciate a dram or less as a secret encouragement. But a hearty spritz before a dinner party would only puzzle — and possibly repulse — my friends.

So, despite the intimidating price tag and cutting-edge Parisian design firm, is M/Mink any more special than almost any of the CB I Hate Perfume scents or even a cleverly executed Demeter? Is M/Mink art or gimmick? Like I said, that's for you to decide.

Byredo M/Mink Eau de Parfum is available in 50 ml and 100 ml. For information on where to buy it, see Byredo under Perfume Houses.

1. You can find an even better image of the shoe hat here.