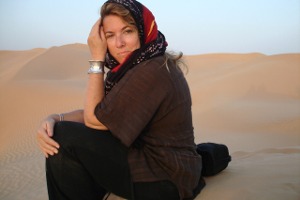 In Part 2 of her interview, Enfleurage owner Trygve Harris discusses the ethics of sourcing agarwood, the challenges of pleasures of living in Oman, and her modern enfleurage project in Colombia. You can find Part 1 here.

In your FAQ and articles on the Enfleurage website, you make it clear that the aromatics trade is politically and ethically complex. It’s sometimes difficult to tell where exactly something is coming from, and you often deal with regions that are rife with conflict. Can you talk about a difficulty you’ve faced?

Yeah, I’ve gotten pretty cynical over the years, whether it’s finding what “organic” might mean in Nepal, or just being in New York. You might find that everyone is screaming “endangered species” just because everyone else is, or that we all accept a line of BS just because we want to. Sometimes you have to keep looking and follow your hunch.

I am probably best known for agarwood. It was (and still is) on all the lists, as endangered and overharvested etc. Believe me it was weird to be on the other side of the environmental argument. It was not comfortable at all. I don’t know that we all resolved it to mutual satisfaction as I still hear all about this “sustainable harvest” oil, but it’s very complex.

My argument was basically that we are losing the forests of SE Asia despite, not because of agarwood, although the wild supply in Laos is pretty well finished. I don’t like the way those poor farmed trees are infected, and the oil that comes from them isn’t oudh in any case, it’s boyah. Yet trees are farmed in Assam, India, and not tormented into infection, but due to the Indian bureaucracy, they don’t exist because they are in people’s homes, not industrial areas. So after being in this world for years, and knowing people from TRAFFIC [the wildlife trade monitoring organization] as well as agarwood mafia [those who control the trade], I am satisfied with my position.

Speaking of countries facing serious difficulties, I’m fascinated by your modern enfleurage1 project in Colombia. Could you talk a little about what you’re doing there and why?

Well, I was contacted long ago by these interested and curious Colombians and we have been buying their products and going down to help whenever we can. It was a long learning process for all of us. They did their research, as did we, but some things had to be changed, like the pig fat. So it’s done with palm oil. The actual process used in France turned out to be wasteful and impractical, with the blossoms directly on the fat, and so forth, so this was changed as well. I think the results are fantastic. We have the only real Gardenia oil anywhere and it smells perfect. We also have perfect Tuberose and Lily.

The downside is that we picked the worst time for this, economically. These enfleurages are very expensive, and so they have not moved as fast as we had hoped although this is now picking up dramatically. They changed the farm over to full organic, and they are meticulous in the extreme. We don’t have the certification yet though as we are still waiting for one of the big perfume houses to support us. It’s just too big an outlay. They have borrowed up to the hilt to make these gorgeous oils.

Colombia is famous for flowers — the climate is perfect. And there are plenty of people who have suffered so much in the past, who now earn a small but serene living making Gardenia enfleurage. In time, we hope to expand this project all over Colombia.

You’re spending a lot of time in Oman these days, working with frankincense harvesters and distilling frankincense. What kind of challenges and pleasures have you had working as a single white American woman in Oman?

Well, yes, I am here much of the time now and trying to make it more and more time. I really love it, it’s a blessing and there are lots of pleasures. And yes, it’s been challenging, for plenty of reasons, and not necessarily the ones you’d expect. I’m pretty unusual here.

First of all, single. At first people were puzzled. Then accepting. Now I think they are a bit uncomfortable and how long will I keep this up when there are so many nice Omani men around? But westerners have strange habits, everyone knows that!

White. Well, that’s a bonus of course. My friend (male) criticized me the other day for getting a suntan; it spoils the effect. Omani women don’t ever feel the sun. Ever. They wear complete hijab, covering everything. Sometimes the eyes show but not always.

The American thing has been a bit of an issue, even though no one likes to say it. As time marches on though, people share their opinions more freely and the US is not well-liked, as we all know, due to our foreign policies, mostly. But the Omanis are the most polite and hospitable people on the planet. My main challenge has been to fit in with them as best I can.

Living in a small, remote, ultra-conservative Islamic tribal town is interesting. There are no familiar customs and everything I thought I knew was wrong, as usual. There is basically nothing in the way I was raised or the way I live in New York that applies here. Even the language is difficult as we have a local language which is a mélange of three — Salalah town Arabic, the mountain language (Jebali) and the desert language (Meheri.) Plus you need some Urdu and Malyalam too, with all the people from the Subcontinent.

Basically, I have needed patience. You can’t show anger here, but sweetness works spectacularly well. It makes you see gender roles in a new light because they are extraordinarily delineated. I have to ask for help all the time. But Omani men jump to give it. Also, Omanis are all about human relationships. They are highly attuned to the unspoken word, to body language, to insinuation and they have eyes like falcons. No way to get away with lying or pretending here, even to yourself. It’s like being under a microscope.

And finally, I have to ask—Trygve is a common Norwegian name, yes? How did it come to be yours? And how do you prounounce it?

My parents named me after Trygve Lie, secretary general of the UN. I pronounce it Trig-vuh.

1. Enfleurage is an old extraction technique in which flower petals are layered in solid fats; you can read more about it here. It is rarely used today. Harris has developed a modern version of this practice that "involves a gentle coaxing of aromatic molecules into palm oil, which is allowed to saturate over time and then is washed with alcohol, which is then distilled to separate out the oil." (via the FAQ at the Enfleurage website)

Many thanks to Trygve Harris for her participation!