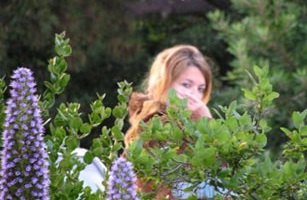 I first heard of Trygve Harris and her West Village shop, Enfleurage, from a friend who is nearly religious in his devotion to rare aromatics. He spoke of the integrity of her sourcing and the quality of her product in hushed, respectful tones. I visited the store on my next trip to New York, but it wasn't until my first newsletter arrived that I understood the Harris magic.

“I could pray to this flower. I might pray to this flower! Ok, I did pray to this flower!” she wrote about frangipani oil from a farmer in India. Then I looked at the website: “This is the rawest and most volatile of the oudhs,” she wrote, about Agarwood Hindi Birrin. “He is like a wild young man, completely out of control. […] though he might make you uncomfortable, there is something alluring and seductive about him, even if you feel a little weird about it afterward.” All right then, I thought, this woman is one of us.

I began following Harris’ blog just as her modern enfleurage project in Colombia yielded the world’s first commercially available gardenia oil in seventy years.1 (Here is Luca Turin’s review of the oil. I own the gardenia and tuberose butters made as a byproduct and they are fantastic—still fresh and delicate two years later.) Harris writes about her extensive travels, often through sparsely populated regions of Asia and the Middle East.

The idea for Enfleurage came to her, she told me, “with a peculiar clarity while sitting on the Plain of Jars in Laos in 1994” after “three months, wandering through Vietnam, Laos and Cambodia.”  After travelling on to Cairo, and then to Yemen to apprentice with a perfumer she had met in Ta’iz (it didn’t work out, but they remain close friends), she returned to the U.S., fell in love with New York, and opened the first version of Enfleurage in 1995. “I must stress that I had no idea what I was doing. None. I knew nothing about business, or New York, or accounting, or any of it,” she says. “The business plan I somehow wrote increases in hilariousness every year.”

My interview questions reached Harris while she was waiting for a plane to New York in the Oman airport. She responded so graciously that I can only share a portion of her answers with you. Part 1 is below. I hope you’ll return to read Part 2 tomorrow.

What are your earliest scent memories?  Was there a moment when your interest tipped over into obsession/passion?  A particular scent?

Earliest scent memories….Gasoline. Water from the sprinklers on the driveway in late afternoon in the San Fernando Valley. Oak trees, dust and brushfires. Horses. A beige baize couch and my mother’s tears when Robert Kennedy was shot. The smells from my parents’ kitchen: marinara sauce, steak, potatoes, garlic and olive oil. New car. Records. Chanel no 5. …Later, I loved those head shops in the 70s:  Primo incense, China musk, and all those other hippie oils. It must have been somewhere around then, the tipping over. I still love gasoline.

You often describe the aromatics as though they were people with quirky, lovable personalities, something I’ve seen people do with perfume, too. What do you think it is about scent that inspires this connection?

Well, I don’t know exactly. It just seems natural! They speak to me, and I am unable to discuss them in a clinical way. It’s too cold! How could some disembodied chemicals sing me love songs? No, they speak in poems, bursting on a stage and singing, shedding and revealing their veils like Salome.

If you had to make a shortlist of aromatics that were indispensable to you—say a top five (but feel free to cheat) — what would be on the list and why?

You ask some difficult questions.

Agarwood. And oudh, the oil of it. Frankincense. And the oil of it. That’s four already. Yikes. Ok, for burning… Agarwood, frankincense and bakhur. At this time the bakhur I’m loving is oudh mubakar. I’ve been into him for a while. It’s agarwood soaked in perfume. All the different Arabian perfume houses have at least one….and you can find it in the souqs as well. Even though I usually prefer small companies, I am in love with Ajmal’s. And we don’t carry it in the store. I smoke my clothes with it. Agarwood I use to smoke my hair and my body. Frankincense I use to smoke everything—me, my clothing, the house, even the car!

Lavender essential oil. Jasmine absolutes (grandiflorum and sambac) and Rose otto. Mandarin too. Our Gardenia enfleurage. These are just visceral friends, I can’t give any rational explanation. Sandalwood of course…I’m talking Indian here.

You’ve called yourself “a sensualist and aromatic maven.”  I’d add “fearless world traveler” to that list. Why have you chosen to so much direct sourcing?

Ha! Well, I don’t know about “fearless,” but I do like to travel and always have. It was never something I considered doing or not doing. I’ve always done it, it’s always been a part of me. I used to hitchhike everwhere, starting at the age of 8 or 9. And I am a freak about where things come from.[...] I’m always totally interested in where oils are from, and why, and how, and so forth.

Finding some nutty French genius living in the forest and making crazy things….that makes me happy. I also really like just finding stuff. Even though I also visit distillers who are already known to me, I love just finding them myself. I found a cool world of Palo Santo in the Paraguayan Chaco once, I think it was in 2006, just hitchhiking around looking for it. I found some weird sassafras stills in Laos, just poking around as well. And I found some cool things in Southern Morocco too, as I was passing through on my way to Mauritania. And Yemen is always a surprise, when you take the time to look, with their wickedly cool water incense, and akhdreen (hair perfume), and sugar bakhur.

Sometimes the people I find end up supplying me, and sometimes not, but I really like just finding them, and buying some, and taking it back to the store. The coolest trip in the world to me is just taking a few weeks and hitchhiking or driving around with this vague goal of finding…whatever. I don’t get to just go walkabout as much any more, but still manage it whenever I can.

I am not the most commercially minded person, so buying and selling oils in itself is not overly interesting to me. But finding them, and bringing them, and sharing the story…that’s something else. And over time I realized that the stories I heard from domestic suppliers about where aromatics were from was alarmingly at odds with what I found. So then, happily, I had to do it myself.

Part 2 of our interview with Trygve Harris will appear tomorrow.

1. Enfleurage is an old extraction technique in which flower petals are layered in solid fats; you can read more about it here. It is rarely used today. Harris has developed a modern version of this practice that "involves a gentle coaxing of aromatic molecules into palm oil, which is allowed to saturate over time and then is washed with alcohol, which is then distilled to separate out the oil." (via the FAQ at the Enfleurage website)