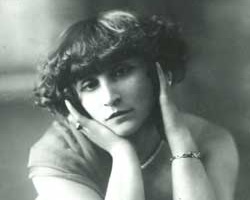 I never read a word by the Marquis de Sade, the subject of yesterday's post, but French writer Sidonie-Gabrielle Colette is one of my favorite authors. I started, just as she did, with the Claudines, and eventually I worked my way through most everything else, and then I followed that up with a few biographies. That was many years ago now, and although I've re-read most of her books since then, some more than once, it's been awhile. Last night I took out My Mother's House and Sido, and skimmed through the sections where she writes about her mother's garden, and I glanced quickly through The Vagabond and Chéri to remind myself why I so loved them.

Colette's life, like her writing, was turbulent, passionate, and above all, unconventional. I know there was, at some point, a Claudine perfume — wouldn't it be fun to smell that now? — but I have no idea what perfume Colette wore herself. If I had to assign her a perfume, it would surely be a heady floral — Piguet Fracas is perhaps too obvious, but it fits. If you'll pardon the anachronism, Etat Libre d'Orange Jasmin et Cigarette would also work, although you'd have to amp it up: more (indolic) jasmine, more smoke, and maybe a hint of leather or some other animalic note in the base.

Histoires de Parfums has done something entirely different. Their 1873 Colette fragrance is a carefree and light gourmand citrus. It starts out sparkling and sweet and tart: seriously, think Sweetart candies floating in a combination of 7Up and Fresca (or don't, if that upsets you). It dries down into a blended floral, heavy on the orange blossom, over a pale, milky-velvety woody musk base (the notes: citrus, orange blossom, lily of the valley, lavender, vanilla, caramel and white musk). It can be a little sharp early on, but later it's softer and rounder, and while it's sweet, it's not so terribly sweet as it probably sounds. The citrus notes seem to linger on well into the later stages, and the lasting power is reasonably good. Histoires de Parfums markets it as a feminine, but I should think anyone could wear it. If you have a problem wearing grapefruit, you'll certainly want to try it several times before you buy, but of course you should always do that anyway, right?

1873 Colette is a sunny, happy, summery scent. It's probably not the best fragrance from Histoires de Parfums, but it's my personal favorite.1 If you're after something that evokes Colette, I don't think you'll find it here — any connection with Colette is lost on me, at any rate — but if you can put that issue aside, it's worth a shot. 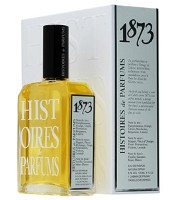 Note: I should mention that my sample of 1873 is 1 or 2 years old, and so predates the latest packaging change at Histoires de Parfums, and I do not know if it has since been reformulated. Update: it looks like 1873 has been reformulated, but after looking through the materials that came with my sample set, I'm now pretty sure (but not 100% sure) 100% sure that I have the newer version.

1. Not counting their newer releases, which I'm still testing. It is likely that one or another of the tuberose trio will supplant 1873 Colette, and I haven't yet tried Moulin Rouge at all.