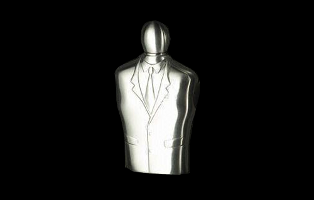 My DNA Fragrance, a company "which manufacturers [sic] one of a kind fragrance based on human DNA profiles", has launched Antiquity, a series of fragrances based on the DNA of dead celebrities. Shown above is M:

M is an exclusive one-of-a-kind fragrance that explodes into an indescribable fragrance, which seemly draws the attention of every person in the room. It is composed of the lightest, but most volatile essences. Much like the performer himself, this cologne is unique and like no other cologne in the world. We guarantee it.

M is engineered from the DNA genetic code of the King of Pop, Michael Jackson.

M is $59.99 for 90 ml. There are also fragrances for Albert Einstein, Elvis Presley, Joan Crawford, Katherine Hepburn and Marilyn Monroe. (via mydnafragrance, with thanks to everyone who sent me links to one of the many articles about this line)