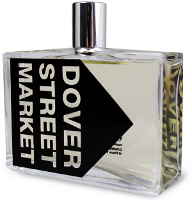 Comme des Garçons' new Dover Street Market fragrance is named for Rei Kawakubo's London store of the same name. It's the brand's first fragrance this year if you don't count the collaborative efforts with Daphne Guinness and Artek, but it doesn't feel like a major launch — it's had relatively little publicity, and as it turns out, it may or may not be the same fragrance as the limited edition scent they did for H&M last year, released in new packaging.1

Dover Street Market is supposed to be a "modern twist on a classic woody fragrance"; the opening is a strong, spicy blend of incense and citrus, accented with plenty of juniper and pine (the notes include bergamot, mandarin, black pepper, coriander, incense, juniper berry, cedar, labdanum, patchouli and pine). It's bracing (and, as that might imply, more masculine than feminine) and lively in the early stages, although it lightens up rather quickly; later, it's a softer, smoother, almost-transparent incense fragrance. If it sounds like something that might fit neatly into the Incense series, that's not quite right: it's doesn't have the atmospheric feel of those scents, and the early stages feel more like a standard peppery citrus for men livened up with some incense — I'm tempted to say it belongs in the Cologne series, but it has more sillage and lasting power than that might imply.

Dover Street Market is a pleasant, wearable fragrance. For my money, I'll stick with the more unusual Ouarzazate when I want something in this vein, but if you still haven't found an incense to love from Comme des Garçons, it's worth a try.

1. I didn't get to smell the H&M scent. The notes are very similar, and at least one commenter said Dover Street Market smelled identical to H&M. If you smelled both scents, do comment!