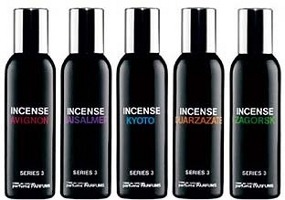 Kyoto & Ouarzazate are two of the five fragrances in the Incense series by Comme des Garçons, which was released in 2002. If you are not familiar with this series, see yesterday's review of Avignon & Jaisalmer for an introduction.

Kyoto pays tribute to the incense culture in Japan, where incense is a traditional part of both Shinto and Buddhist practices, and in earlier times was also used a time measuring device. Kodo, the Japanese incense ceremony, originated in Kyoto. Like the better known tea ceremony, it is a combination of social gathering and art form. During the ceremony, the incense woods are heated at a low temperature, so that the aroma is released with little or no smoke. 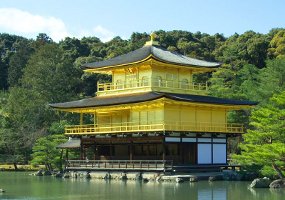 The Kyoto fragrance has notes of vetiver, patchouli, amber, incense, cypress oil, coffee, teak wood, cedar and everlasting flower. While this is not a sheer fragrance by any means, it is not as heavy or dark as the notes might indicate. There is a little burst of coffee in the early stages, but once that calms, it is a very peaceful and relaxing scent centered around deep woods; I find it the most meditative of the five.

It is slightly green, with earthy undertones from the vetiver and patchouli. The coffee struck me as an odd touch at the start, but a lingering hint blends beautifully with the woods in the drydown. The incense is cool, but it is not the unforgivingly cold incense of Avignon, and it is only mildly smoky. It is a simply gorgeous scent, although again as with Avignon, it is perhaps more masculine than some women will care for.

Ouarzazate is situated at the foot of the Atlas mountains in southern Morocco. The name translates as "the door to the desert", and the town is both a popular base for tourists entering the Sahara desert and the home of the largest movie studio in world (parts of Lawrence of Arabia, Alexander, and Star Wars were filmed here). 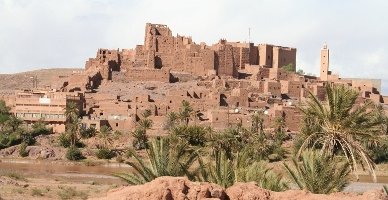 Incense has been used in Northern Africa and Greater Arabia since ancient times; frankincense was once the most precious commodity in the world, and at the height of the trade along the Incense Road linking Egypt to Arabia and points farther east, over 3000 tons were traded each year. I have not been able to discover much of interest about its place in modern Moroccan culture except that its use seems to be ubiquitous, and perhaps a part of everyday life more than something that is reserved for religious ritual.

The fragrance notes for Ouarzazate are incense, pepper, nutmeg, clary sage, wenge, musk, vanilla, labdanum absolute, and Kashmir wood. It starts off very invigorating, with herbal notes from the clary sage accented by lemon and a spicy-pepper blend. As it dries down, it gets very mild and quiet, and is joined by lightly smoky notes of incense and woods, with the barest hint of dry vanilla.

Ouarzazate is the sleeper scent of this series. It has a more muted presence than the others, and when I first tried it on a paper test strip, I thought it was the least interesting. On skin it is considerably more captivating, and it now ranks among my favorites.

Note: Kyoto image is Kinkaku, or Golden Pavilion, which is the shariden at Rokuonji, the Temple of the Golden Pavilion, in Kyoto, Japan by Fg2 at Wikimedia. Ouarzazate image is The Kasbah. Ourzazate [cropped] by jsemidey26 at flickr; some rights reserved.