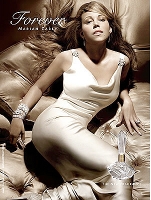 All those recent stories about how the celebrity fragrance trend is dying? Don't believe 'em. They've been saying that every year that I've been writing this blog, and look around — do you see fewer celebrity fragrances? Au contraire. The pie might be shrinking, but apparently everyone still wants a slice. And here is Mariah Carey (you might not recognize her right away given the wildly enthusiastic photoshopping) with Forever, her third fragrance in two years (not counting one flanker and two collector bottles).

Forever hopes to reflect Carey's satisfaction with how well her life is going:

I am in a wonderful place right now, surrounded by all the things I love, and Forever captures this moment in time.1

Forever is supposed to be a "modern opulent floral", and if you take modern opulence to be watery rather than full-bodied, that's exactly what it is. The opening is crisp, fresh and watery, with tart apple plus some added greenery and citrus; the heart is a watery gardenia/tuberose floral blend with vaguely fruity undertones. The florals are strong and diffusive for a very short time, after that, they're sheer, and need not scare anybody. The base is clean, pale musky woods.

Forever is nice, and doubly nice for what it isn't: it isn't a fruity floral, it isn't pink, it isn't an Angel clone, and it doesn't end up with buttery caramel or any other kind of candy. It has a more grown up feel than Carey's two prior efforts, M by Mariah Carey and Luscious Pink. That isn't to say it's wildly original — it's sort of like a mashup of Dolce & Gabbana Light Blue and a much-diluted, less creamy Marc Jacobs for Women2 — but we don't get all that many straight-up white florals in the celebrity genre so it's a welcome addition. Still, personally I'll take old fashioned opulence over modern opulence any day: Forever's base is too anemic to hold my interest after the florals die off, and besides, I'll take full-bodied over watery. Worn next to Marc Jacobs for Women or Estee Lauder's Private Collection Tuberose Gardenia, Forever feels like a diet-decaffeinated-budget variation on the theme, and the Marc Jacobs and Estee Lauder versions are still going strong hours after Forever has fizzled out to a little dollop of musk. If most white florals are just too much white floral for you, though, Forever might be just the ticket.

2. With props to jonr951, who smells all the celebrity fragrances before I do and tells me what other perfume(s) they smell like.