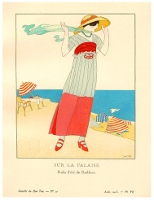 This year, it seemed as though summer would never really begin in my part of the world. After weeks of almost-daily rain, however, and an odd chilly spell that saw me wearing black tights well into June, we’ve finally enjoyed some well-deserved days of sunny blue skies and warmer temperatures. I’m finally adjusting my clothing, my fragrances, and even my mood to suit the climate. So, at last, here is a list of my personal fragrance choices for the season.

Diptyque L’Ombre dans L’Eau. I have a feeling I mentioned this fragrance in my top picks for Spring 2008. I wear it even more often during summer, and I’ve done so for the past five or six years. For me, L’Ombre dans L’Eau is the perfect balance of floral, berry, and grass notes, with a rosy heart that suits my tastes perfectly.

Creed Fleur de Thé Rose Bulgare. Speaking of roses, this is one of the truest rose fragrances that I’ve ever tried. It can be hard to find, and it’s definitely not cheap, but tester bottles do occasionally surface on online discount sites. It’s a dewy bunch of just-picked pink roses, a few green leaves, and a wisp of lemon peel. (Rumor has it that this fragrance was created for Ava Gardner, but it feels bright and airy rather than glamorous.)

Honoré des Prés Bonté’s Bloom. Honoré des Prés offers five high-end organic fragrances (four of them created by Olivia Giacobetti), each intended to evoke a different experience of nature. To my nose and my mind, Bonté’s Bloom is an afternoon in the countryside. It makes me feel as though I’ve spent the morning lying in the grass and wildflowers of a sunny meadow. It has light staying power, but then again, it’s impossible to over-apply, even on the stickiest of summer days.

Kenzo Parfum d’Été. I wore Parfum d’Été exclusively one summer, the year it was released, and I received constant compliments. I’m glad it’s still available, even though Kenzo has given the bottle a boring redesign. It’s one of the few “green” fragrances I enjoy; somehow, its watery quality softens the crisp edges of its lily of the valley and leafy notes.

Aroma M Geisha Pink. Summer is the perfect time to indulge in frivolities such as a brightly colored pedicure, a big floppy hat, or a fruity cocktail. Once you’re in that playful mindset, you might also want to try a sweet blend like Geisha Pink’s concoction of sugared plum, orange, and vanilla. Geisha Pink, like its sister Geishas from Aroma M, is packaged in a roll-on bottle (with a whimsical, kimono-like wrapping) that’s perfect for a vacation getaway.

Ava Luxe The Beach. This fragrance was reportedly inspired by memories of childhood visits to the beaches of Cape Cod in Massachusetts, and that sounds about right to me. This scent is a bit salty, a bit breezy, and could be worn by either women or men. It suggests a beach where you would make sand castles, gather driftwood and sea glass, and fly a kite at sunset.

Bond no. 9 Fire Island. Bond no. 9’s interpretation of a beach, on the other hand, demands a daring designer bikini and a very chic pair of oversized sunglasses. It’s a sparkling blend of neroli, tuberose, and ozone notes that conjures up an expensive suntan lotion worn on the French Riviera, and even though that’s not my usual style, I love wearing this scent on hot days. I think it smells best on sun-warmed skin.

Creative Universe Element of Surprise. For me, the surprise is finding a citrus-and-tea scent that works well on me. All of Creative Universe’s light, simply-constructed fragrances are suitable for summer wear, but I’m particularly fond of this one. The lemon note is tart but never turns sharp, and the jasmine-tinged white tea base is smooth and clean without feeling stale. Element of Surprise also lasts unusually well for a citrusy fragrance.

Caron Aimez-Moi. Aimez-Moi’s quirky confection of violet and anise is something that the film heroine Amélie could have worn while strolling the streets of Montmartre. Unfortunately, the Parfum formulation has been discontinued, but the Eau de Toilette has a vivacious personality that makes it even more appropriate for summer.

L’Artisan Parfumeur L’Été en Douce. On a late summer afternoon, nothing feels as good as a nap in a shady room, on a bed made with freshly laundered sheets. L’Été en Douce (formerly known as Extrait de Songe), thanks to its notes of linden, hay, and soft musk, smells cottony and relaxing in just the same way.

Wishing you some fragrant summer pastimes, wherever you may be spending the coming months!