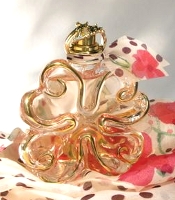 Lolita Lempicka will launch Si Lolita in August (the US in 2010). The new spicy floral perfume for women was "inspired by a four-leaved clover" and hopes to reach "a more mature" audience than the original Lolita Lempicka.

Lolita Lempicka Si Lolita will be available in 30, 50 and 80 ml, concentration unknown. (via cosmeticnews, image via beaute-addict)

Update: Si Lolita is an Eau de Parfum, and is "meant to have an air of Parisian bohemian chic along with little girl whimsy". Additional notes include wallflower, heliotrope. (via wwd)

Another update: see a review of Si Lolita.