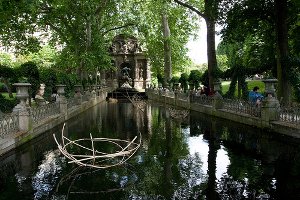 A search on Basenotes for fragrances with "Paris" in the title turns up 37 names. Sure, a few are Paris Hilton scents, but the rest are plays on the city itself: Yves Saint Laurent Paris, of course; but also Bourjois Evening in Paris and Springtime in Paris; Holzman & Stephanie La Parisienne, its male counterpart, Molinard Le Parisian, and the baby-faced Téo Cabanel Demoiselle de Paris; a couple of discontinued Guerlains, Paris-Gem and Chypre de Paris; the nearly forgotten, double-hitter Caron London Paris; and more.

Why is the idea of Paris so attractive to perfume companies? (Or to musicians, novelists, and filmmakers, for that matter?) Paris has more romance than, say, Sacramento, but the reality is that it's a big city with bad traffic, dirty air, poverty, racism, a high cost of living, and dog poop on the sidewalks. It's a myth that every corner café serves up homemade cassoulet and house wine from the owner's cousin's vineyard in Burgundy. You're more likely to end up with a pre-frozen pizza or an industrially fabricated croque monsieur. And not every Parisian woman is chic — or thin. I'm not saying that Paris should be a theme park with men in berets, but the amount of loud pink and green wallpaper in many a downscale Parisian hotel is alarming.

I say this, and yet I can't stay away. I think about having a salade Niçoise and a glass of Gascon white wine in summer under the chestnut trees in the Jardins du Luxembourg then reading Elle by the pond. I remember a hotel cat, Velouté, who jumped up to wrap his paws around his elderly owner's hand to take a morsel of cat food while we had bowls of milky coffee in the (loudly wallpapered) lounge. One winter day I walked for hours so absorbed in the people and buildings I passed that at last, ravenous, I went into the first bistro I found still serving lunch and had a blanquette de veau that forever changed how I saw comfort food. Another day I held up two sweaters for a saleswoman's opinion, and she said: "Cela vous va, mais ceci est plus chic" ("That one suits you, but this one is more chic") — a distinction that guides how I try to dress to this day.

These are some of the memories that I've sewn together into a fantasy of Paris that grows stronger when I'm not there, and that wears thin when I'm lucky enough to take the trip and emerge, groggy from a red-eye flight, from the metro into the noisy, exhaust-laden boulevard above. The fantasy is wildly powerful, though. Just writing about it brings an almost physical ache, and I'm already scheming how I can swap my house for a few weeks this summer for an apartment in Paris.

In some ways, perfume is like Paris. The Paris I crave doesn't fully exist, but at the same time it's very real to me. Similarly, a dab of Annick Goutal Songes is supposed to transport me to an evening on a Caribbean island, a few drops of Comme des Garçons Stephen Jones will make me chic, and a spritz of Chanel 31 rue Cambon (another Paris reference!) and I'll be able to twist my hair into the ideal chignon. None of these fragrances has fulfilled its promise, but each of them smells good. Maybe more importantly, each of them fills the need for something to dream about.