The Eaux de Fleurs collection is the latest from Kenzo. They are starting off this year with a trio, Eau de Fleur de Thé (tea flower), Eau de Fleur de Soie (silk flower) and Eau de Fleur de Magnolia (you can figure that one out), and they're planning to add a new flower to the series every year. Like the Guerlain Aqua Allegoria collection, these are meant as a "return to nature", and they're advertised as "subtle" waters based on flowers picked from Japanese trees. 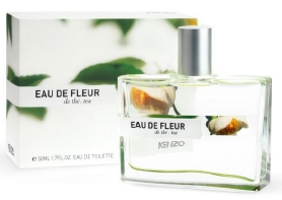 Eau De Fleur de Thé is meant as a tribute to "the tea flower". It was developed by perfumer Aurelien Guichard, and is described as "a floral infusion with green tea and musky notes". It's a slightly smokier (although only briefly; I wouldn't call it a smoky scent in general), more-tea-less-citrus variation on Bvlgari's Eau Parfumée au Thé Vert. The base is clean musk, the floral notes are sheer and indistinct, and I'd call it a unisex. It's very wearable, and while I wouldn't call it wildly unusual, it would be perfect for anyone looking for a reasonably priced summer-y green tea scent with decent lasting power (for a light tea fragrance, mind you) and without too much sweetness. It was my favorite of the three at first, but over subsequent wears the Magnolia (see below) has won out. 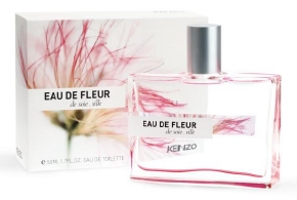 Eau De Fleur de Soie was developed by perfumer Jean Jacques. It is both literally and figuratively the pink one of the bunch, and so regular readers can already guess that it was my least favorite. It smells like a sheer fruity floral, rather berry-ish but not at all too sweet, with perhaps a touch of rhubarb or some other tart fruit. I don't know what the silk flower smells like, but this didn't smell any more distinctive than your average sheer pink fruity floral: just less sweet. It's perfectly wearable as is, but I found it greatly improved by a light layer of the Eau De Fleur de Thé sprayed on top. 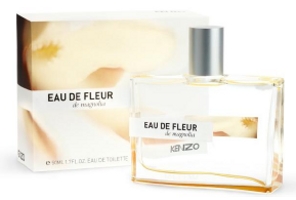 Eau De Fleur de Magnolia is described as "a luminous floral with citrus notes", and it was developed by perfumer Francis Kurkdjian. It has a brisk citrus-y opening and a golden aura that matches the color of the juice. Like the others, it's more transparent than not, but it has a lovely creamy, almost-smoky warmth to the dry down — it would be perfect on a cool spring evening. I'm not sure if it is going to please someone looking for that perfect magnolia soliflore, but it's easily the most unusual of this trio.

The packaging on these is lovely — the pictures really don't do them justice. The labels and the slightly-wavy bottles are simple but attractive, and if you don't rip them to shreds before you figure it out, as I did, the outer boxes fold out from the side to show floral images on the inside. Very nicely done.

More reviews of the trio: March at Perfume Posse, Octavian at 1000 Fragrances.