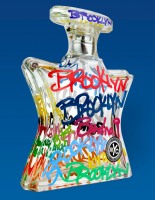 Next up in Bond no. 9's series of fragrances based on New York neighborhoods: Brooklyn, due for launch in March.

Brooklyn is changing. New York’s legendary city within a city, home to a century or more of strivers, dreamers, and Nobel laureates, is reinventing itself, neighborhood by neighborhood, as an edgy metropolis. Sure, for a while there Brooklyn was a necessary second choice for the real estate-challenged Millennials seeking affordable rents and more square footage than formidable Manhattan could offer. But now— a whole new story. Today’s Brooklyn is preferable to a new generation of artistic émigrés. This is where the artists and musicians choose to move. It’s home to graffiti-ists, gaffers, and key grips, to web designers and aspiring editors. This is where fashion stylists live. New York-bound hip-and-cool Seattle-ites prefer to move to Brooklyn; smart Stockholmers book their hotel rooms here.

Bond no. 9 Brooklyn will be available in 50 and 100 ml Eau de Parfum; the street-art-inspired bottle was designed by Brooklyn-based artist Shawn Lovejoy. (via press release from Bond no. 9)

Another update: see a review of Bond no. 9 Brooklyn.