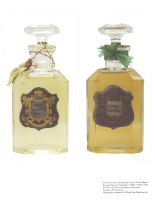 With the winter holidays approaching fast, it's time to discuss a book that has been sitting on my shelf for several months now. It's one of those rare books that combine pleasure and knowledge in equal measure — beautiful looks, matched with refreshing and original content. Which is no small accomplishment, when you think of all the coffee-table books we've reviewed on these pages alone. Author Roja Dove needs no further introduction*, and many of you have either read about The Essence of Perfume on other blogs, or perhaps even own a copy already. What I want to do here is to give a brief overview of its contents, and then add a small critical note, which I hope won't resonate too badly with the author. We'll see.

If you're covering a big topic like perfumery in one book, you're bound to make concessions. This one starts with a very brief introduction to the sense of smell, which is obviously not the author's strongest point. But if olfaction is what you're most interested in, there's an ample choice of specialized books to consult instead. Chapter two is a far more elaborate sketch of the origins of modern perfumery. It features, among other things, stunning images of three unique Guerlain bottles — Bouquet de Victoria, Prince Albert's Bouquet, and Bouquet de Napoléon (latter two are shown above) — which came from Roja Dove's personal inventory. They're dated between the 1850s and 1870s, and are described as the "only known examples" in the world.

Chapters three to five are about techniques and materials in perfumery, fragrance pyramids, and 'facets' in perfume compositions. I don't think I've seen facets described so methodically anywhere else; they are not the same as 'notes', in that they describe effects within a composition, rather than its more distinct elements. But the really good part starts in chapter six, which covers more than one hundred pages on the Great Classics. Here the author gives proof of his skills as Professeur de Parfums and Guerlain connoisseur. It's like an illustrated lecture, in which we learn some surprisingly funny stuff, like Jean-Paul Guerlain's quote that "(t)here are only two good fougères, Jicky and Mouchoir de Monsieur — all the rest are for truck-drivers" (p. 86). Beautiful pictures of vintage bottles and advertisements make this whole experience complete.

The largest part of chapter six is dedicated to the evolution of modern perfumery. Starting with Jicky (1889), we are invited to an extensive tour of the past 120 years in fragrance. The great classics are placed in the context of major social and cultural events, and some interesting questions are raised along the way — for instance, the extent to which Guerlain's Shalimar (1925) was inspired by Coty's Emeraude (1921). If all this makes you wonder about a certain bias in the book, let me reassure you that there's plenty to read about the Chanels, Carons, Diors, Piguets, Worths, Cartiers, Yves Saint Laurents, and Thierry Muglers of this world too.

Of course, there's also plenty for the author to complain about. In a short roundup at the end of the book, he points his arrows at the "amoebic" perfume industry, which "has been cheapened and bastardised over the past decade or two as the industry was slowly bought up by large multi-national conglomerates [...]. The net results are odours which are both monolithic and lacking in any form of subtlety and refinement — or they are vapid, lacking in originality or staying power" (p. 252). He considers today's celebrity and mass-market fragrances as the contemporary equivalent of the "smart toiletries" of the 1950s and 60s, whose main purpose was to generate large profits for large corporations. The difference is that today's market is flooded with products that are "common and disposable" by comparison. Roja Dove adds that fortunately, there are many new perfume houses nowadays that cater to a growing number of people who understand "true olfactory luxury" (p. 253).

The main problem I have with this book (apart from the author's strange habit of changing Coty's Chypre into Le Chypré) is in how it links perfume culture to large-scale social phenomena. All too often the author suggests causalities between major social and political events on the one hand, and perfume trends on the other, giving us the false idea that we can draw direct parallels between the "taste of a decade" (I'm phrasing this in my own words) and great periods of prosperity or turmoil. Saying that "In the 1910s perfume — like the decade's women — was emancipated" is in itself meaningless; adding that women no longer wanted to smell of flowers because of their newly found 'liberation' (again, my rephrasing) hardly makes the argument more convincing. And even if you drag in the Russian Revolution, the first World War, and the women's Suffrage Movement (!) to show that it "all seemed to be part of the death-knoll [sic] which signalled the downfall of established order", it remains unclear how this changing power balance relates to "a decade that saw strident change with the creation of the Chypré accord", as mentioned in the next paragraph (p. 93).

Three relatively minor issues to conclude: the bibliography is an absolute mess (full of typos) and needs to be fixed; the rest would benefit from a cleanup too; and finally, the hype about the author (three pages in the back of the book) is a little over the top. But all things considered, I still think it's a beautiful book. I love the anecdotal parts, and the bottles from the author's personal collection are a special treat. He managed to put together a comprehensive book on perfumery that makes this a desirable Christmas gift indeed. The cover price is a steep $70 (£40 in the UK), but it's available from Amazon for little over $47.

* But just in case, you can read more about Roja Dove at his website.