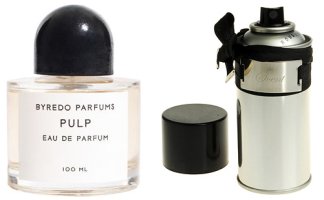 Ok, raise your hand if you'd like to see a moratorium on new niche brands? At the very least, I'd like to see an independent judging panel evaluate each line, sniff a sampling of their wares, and determine if they have anything to offer that the world really needs. Given how much product is already out there, we don't need much, do we? More product makes it harder to find the perfect scent, not easier.

I used to define a perfumista as someone who wants to smell everything, but I can't say I fall into that category anymore. I don't want to smell everything if that means smelling 1500+ new fragrances a year, and that's my (obviously unofficial) estimate of what we're going to see before 2008 is over*. More and more often, new niche lines launch, and after reading the fragrance descriptions, I decide I'm just going to save myself some time and trouble and not smell them at all.

Byredo was one of those lines. They launched five fragrances earlier this year, and as I said at the time, none of the fragrance descriptions made me drool on my keyboard. So I didn't chase after them. Luckily, a kind friend sent me a sample of Byredo Pulp so I could see what I was missing. Byredo Pulp has in spades what is missing from most new niche lines: fun. Here's the description from Les Senteurs:

The top notes are dewy blackcurrants laced with green bergamot and cardamom seeds: The heart is of sun-ripened figs from Greece, the reddest of Eve’s apples, the creamy coconut sweetness of tiare blossoms; the opulent base mixes peach fruit and flower, praline and cedar wood, giving richness and tenacity.

Perhaps that sounds enticing to you, but to me it sounds like a hot mess. The real thing, however, is fabulous: a huge burst of fizzy-sweet juicy berries + green fig + peach tempered by something tart that smells to me like rhubarb. Someone on MakeupAlley described it as "insanely fruity", and that's exactly what it is, and it stays that way for an insanely long time. I can't claim it isn't sweet (it smells like fizzy strawberry rhubarb jam) and I wouldn't claim it was wildly sophisticated, it's just that it's a lot more inspired than your average fruity floral. The dry down is calmer, drier, and woodier, but it stays fruity (with more and more emphasis on the fig) and cheerful pretty much straight through to the end.

Byredo Pulp is $195 for 100 ml, which most unfortunately spoils the fun, at least for me. I haven't tried any of the others from the line, if you have, please comment! For buying information, see the listing for Byredo under Perfume Houses.

A different sort of fun, more along the lines of weird-little-niche-oddity-fun, comes from Boudicca Wode. Wode, if you remember, is the one that comes in two versions: the disappearing dye-your-skin-blue version, called Paint, and the regular, "just fragrance" version, called Scent. If you don't remember, you can read more here, or just watch the video here. I'm trying the Scent, which is in a stronger concentration (presumably you'd want to spray the Paint with abandon, just for the fun of it).

The juice itself was developed by perfumer Geza Schoen, and was reportedly inspired by the smell of raw opium. I'm fresh out of raw opium so the reference is lost on me, but here's the full description from Boudicca:

Luckyscent says it smells like "wet stone", and that's as good a description as any, especially of the early stages. It's a sheer fragrance, dark-ish, and nearly bone-dry. Early on it's spicy and resinous; later, it's dry, softly spiced leathery woods. It's probably more masculine than feminine, but in the best weird-little-niche-oddity tradition, it doesn't really smell like it has a gender. It's far more wearable, even enjoyable, than I expected, and it's unusual enough (if I was on that independent judging panel, I'd let it through) but I can't say I'm entirely captivated: I'd wear it if I had it (and it would be awfully fun to have a can of Paint), but it's not going on my "to buy" list.

A word of warning: don't layer Pulp and Wode; the combination is not so very wonderful.

* The official count, by which I mean Michael Edwards' count, will probably be around 900, but if you include all the indie brands he doesn't count (some of which I announce here, but many of which I don't), I'm sure it will be closer to 1500. Last year, a reader mentioned in the comments that she'd kept a spreadsheet listing new releases for 2007 and her final tally, if I remember correctly, was over 1200.

To put that into perspective, bear in mind that the official count for 2005, the year I started Now Smell This, was around 450.