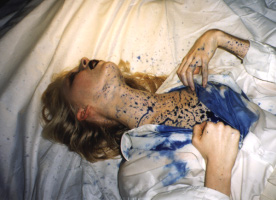 Boudicca, the London-based design house of Zowie Broach and Brian Kirkby, will launch Wode, their first fragrance, this fall (it was introduced in conjunction with their Paris couture collection this week):

An experiment five years in the making, involving a small army of specialists who've all signed non-disclosure agreements, it's more of an anti-perfume that Kirkby claims "does something never done before and is applied in a new way." But here's the kicker: it won't be available for sale when it's unveiled in a "spectacular" September launch. "If I say too much I'll be in breach," explains Kirkby, "but it will not follow the conventional route of a fragrance."

The fragrance is named for woad, a plant traditionally used to produce blue dye, and when sprayed from its 'graffiti can', will initially turn skin and/or clothing blue, then will turn transparent:

Wode, the revolutionary Art Fragrance from BOUDICCA, explores further the myth around Queen Boudicca (aka Boadicea). Legend has it she and her tribe wore a cobalt blue war “paint” on their skin that gave them a ferocious and mythical look when advancing into battle. When finally defeated by the Romans, Queen Boadicea killed herself by swallowing hemlock, an extract of which is included in Wode.

The fragrance itself is a spicy animalic by perfumer Geza Schoen of Escentric Molecules. According to Schoen, the perfume "is based on the smell of raw opium".

You can watch a short video for the fragrance at Platform 13. 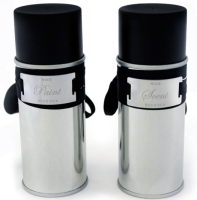 Update: the Boudicca Wode scent will come in a regular Eau de Toilette (€98 for 150 ml) or in the blue paint form described above (€83). It will launch in October; in the US, it will be at Barneys, in the UK, at Browns and the Dover Street Market. (via cosmeticnews)

Another update: see a brief review of Boudicca Wode.