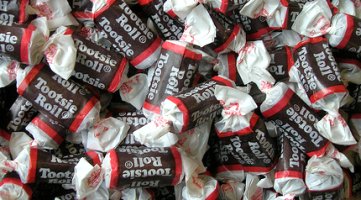 A round-up of chocolates from Demeter:

Some time ago, I reviewed Demeter Jelly Belly Hot Fudge Sundae and noted that it smelled more like brownie mix than a hot fudge sundae. I wondered at the time how it compared to Demeter Brownie, and I'm sure many of you have been unable to sleep nights waiting to see how that would all turn out; well, here is your answer: they're pretty close, but Hot Fudge Sundae is creamier and richer, and more chocolate-y. It smells more like brownie mix than the Brownie fragrance does (neither smells like an already-baked brownie), and it also has better (albeit considerably less than excellent) lasting power.

I'd never really noticed it before, but Tootsie Rolls don't have much of an aroma. I tried heating one in the microwave to see if that would help, and the result was a very light but vaguely unpleasant odor. This odor is hard to describe, but it certainly doesn't smell like anything edible, much less chocolate or caramel. I suppose Demeter didn't have much to work with here, but their Tootsie Roll smells equally inedible, kind of like a mixture of plastic, chocolate and vanilla. There are many people who don't get the appeal of Demeter; who ask: why would you want to smell like gingerale? or crayon, or swimming pool? All I can say is you either want to or you don't, but when these "scent memories" work, they make me smile. Tootsie Roll does not make me smile. It does, however, have reasonably good lasting power.

The Reese's Peanut Butter Cups fragrance doesn't work for me either. Like real Reese's, it doesn't smell all that much like its supposed components, peanut butter and chocolate, and while the Demeter version does an adequate job of capturing the entirely synthetic aroma of the real product, Tootsie Roll and Reese's turn out to be candy products that I'd rather eat than smell (in fact, I was forced to eat 2 Reese's cups while writing this).

I haven't any Junior Mints on hand, but going on memory, the Demeter version is both a successful rendition and much more fun to wear than the Tootsie Roll or Reese's. It's a huge burst of sweet mint with hints of that dark chocolate food product that makes up the outer shell of the real Junior Mints, my long-time movie food favorite. It made me smile, but only briefly: this one is short-lived.

Hershey's Kisses and Hershey's Special Dark are both just ok. The Kisses doesn't smell all that much like chocolate, but then, neither do real Hershey's Kisses (and yes, I just ate 3 to be sure). I'm fresh out of Special Dark bars, but the perfume version is somewhat richer than the regular Kisses, as I suppose it should be. It still isn't as rich or chocolate-y as the Jelly Belly Hot Fudge Sundae, though, nor does it last as long.

I guess it would be hard to market a Demeter scent based on, say, Dolfin Noir Cumin or Scharffen Berger Mocha, but all of the chocolate fragrances reviewed here reflect the fact that these popular childhood candies from The Hershey Company and Tootsie Roll Industries just don't smell all that wonderful to begin with. If you want some chocolate from Demeter, the best under consideration today is the Junior Mints, but the best overall chocolate from Demeter (and the only one I'd wholeheartedly recommend) is still the Jelly Belly Hot Fudge Sundae. I should note that Demeter also makes Chocolate Chip Cookie and Chocolate Covered Cherries fragrances and I've never tried either; please comment if you have!

For buying information, see the listing for Demeter under Perfume Houses.