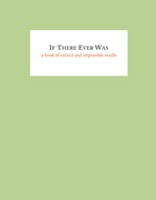 What does communism smell like? How about the Sun, or Cleopatra’s perfume, or the atomic blast that destroyed the city of Hiroshima? This booklet, published on the occasion of the exhibition If There Ever Was, attempts to bring distant, elusive, and sometimes impossible olfactory experiences to life. Curator Robert Blackson commissioned thirteen fragrances from eleven perfumers and smell artists, including Bertrand Duchaufour, Christophe Laudamiel, Christoph Hornetz, Mark Buxton, Sissel Tolaas, and Geza Schön. If, like me, you missed the show at the Reg Vardy Gallery, this booklet gives you a chance to smell them all in the comfort of your own home.

Each scent of the exhibition is encapsulated in a scratch-n-sniff card, and comes with a short explanatory text. What these fragrances have in common is that they all refer to objects that are absent from our experience: they represent things that are temporally and/or spatially remote. There are no traces, for instance, of the original recipe to Cleopatra’s perfume; we can only guess what it really smelled like, just like we can't detect the odor of the Sun (nor of an atomic blast, for that matter) from up close. The stories, objects and concepts behind these fragrances show that what is beyond our physical reach, or what seems lost forever, can be brought to life through smell: the key is to translate olfactory imagination into a real, odorant illusion.

A nice example is the story of the unidentified object that crashed in a farmer’s wet field near the Peruvian town of Desaguadero in 2007. The violent impact produced a large crater that filled with boiling, noxious smelling groundwater. Speculations on the nature of the object that fell from the sky (was it a Chilean missile? a US spy satellite? a fireball containing alien microbes?) went hand in hand with complaints of physical ailments among the local population. Research revealed that the impact had been caused by a meteorite that hit a pocket of arsenic buried in the soft mud; the gas released from this deposit came up through the groundwater and released the stench. Mark Buxton recreated the smell of the Peruvian meteorite; I can't say what he did exactly, but I assume he left out the foul smell of arsenic gas (which is supposed to smell like garlic) and the muddy pool. Somehow, the smell of the meteorite reminds me of freshly applied auto body filler material (but I could be completely wrong here).

Robert Blackson is primarily interested in the production of olfactory representations, and in that light he sees modern day perfumers as true artists: “Modern perfumers’ artistic appetite for the abstract and unexplainable is what separates their interest from flavourists and binds the world of contemporary fragrances with contemporary art” (p. 3). He briefly discusses the discreditation of smell in Western philosophy (leaning heavily on Constance Classen’s book Aroma), and makes a few comments on smell in contemporary aesthetic discourses.

The exhibition at the Reg Vardy Gallery recently drew the attention of Nasa: they were impressed with Steven Pearce's reconstruction of the smell of the Mir space station, and asked him to create the smell of space for their astronauts in training. It may sound trivial, odd, or perhaps even irrelevant to us mortals here on Earth; but smell research is indeed applied in areas that go far beyond the world of fine fragrances and laundry detergents. In fact, the story of Susanne Böden shows how scent has already been used in the past by oppressive regimes for tracking down and identifying suspects or fugitives: in the former German Democratic Republic, it was common practice for the Stasi to take samples of people's body odor during interrogations. Bits of smelly fabric were kept in labeled jars; many of those survived the fall of the Berlin Wall, and as a result, scent artist Maki Ueda was able to reproduce the smell of Ms. Böden's olfactory record. Clearly then, biopower is no science fiction; in combination with DNA and iris-scans, human scent profiles may soon become instrumental in exercising control over people. (See Octavian Coifan's comment on this very same topic!)

As a physical document, If There Ever Was is almost as dynamic as a living object: after intensive use it produces a rather nauseating cacophony of smells that (I assume) will eventually die out. Currently, my copy emanates a candy-like odor of red fruits, but it still changes every time I scratch a new card. Above all I think it's an audacious experiment, in that it tries hard to prioritize the discursiveness of smell over language. The result is like a “cabinet of intangible curiosities”, as Blackson puts it; but more than that, I think it showcases the future of smell in art and biotechnology. This fascinating little book tickles the mind as well as the nose.

If There Ever Was… a book of extinct and impossible smells
Surrey (UK): Art Editions North (2008)
Hardcover, 41 p.