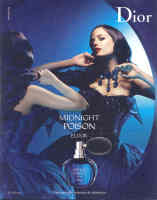 Christian Dior has launched new elixir versions of their Poison flanker scents, featuring "all of the opulent base notes of the original Poison product, blended with individually selected flavours".

Midnight Poison Elixir (shown) ~ based on the original Midnight Poison fragrance, enhanced with "intense, voluptuous, flavorful notes of caramel - fruity and toothsome, with an appetizing "toasted" fragrance - and the mellow, enveloping aromas of vanilla".

The Christian Dior Poison Elixirs are available in 30 and 50 ml Eau de Parfum. They can be found now at Sephora in France. (first quote via vogue.co.uk, additional quotes via dior)