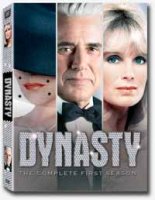 Rather than tackle one subject today, I’d like to pull together a handful of perfume odds and ends. If you have something to share, too, please leave a comment.

Dynasty: During the first season of Dynasty, Krystal Carrington’s son-in-law gives her a bottle of perfume that he bought on his honeymoon with Fallon (who, incidentally, had been carrying on a long-term affair with his father). As she received the bottle, she said, “Bal à Versailles, my favorite.” So what does that leave for Alexis to wear?

(As an aside, if you rent the first season of Dynasty because you want your fill of Krystal and Alexis plotting against each other, you’ll be disappointed. Alexis doesn’t appear until the last two minutes of the last show of the season. Still, Dynasty is great entertainment, and I wish my library had the second season. If you need an intellectual palate cleanser, you can always knock off a few pages of William Blake before bed.)

Vintage Eau de Cologne: Jenny, a perfume lover I met through Now Smell This, pointed out that vintage Eau de Cologne seems to last as long as modern Eau de Toilette and Eau de Parfums, and I think she’s right. A splash from my vintage bottles of Guerlain Mitsouko or Worth Je Reviens Eau de Cologne lasts all day. I wonder if colognes used to have a higher concentration of perfume oils?

Scent endurance: Vintage clothing often smells of mothballs, cigarette smoke, body odor, or general moldiness, but rarely of perfume, strangely enough. Most odors disappear after drycleaning and a thorough steaming. Body odor is the most persistent scent, and often no amount of cleaning or Febreze will get it out.

Scent in dreams: I know many people see color or hear music in dreams, but I’m here to tell you that people can smell in dreams, too. Not long ago I dreamt that someone handed me a sample vial of perfume (I’m surely not the only person who dreams about perfume sometimes?) and I clearly smelled Lorenzo Villoresi Yerbamate.

Vintage atomizers of parfum: Both times that I bought parfum in an atomizer from an unopened box at least ten years old, the parfum had evaporated. On the other hand, when I’ve bought parfum in other types of bottles, it’s been all right. Buyer beware.

Patchouli: Many of you might loathe patchouli, but I bet that some of you patchouli-haters might change your mind if you smelled the good stuff. Living in Portland, I get drafts of head-shop patchouli all the time. Until a few years ago, I never associated that patchouli with the delicious, sensual patchouli that I smelled in the drydown of some of my favorite scents. Now I adore patchouli. Montale Patchouli Leaves, Keiko Mecheri Patchoulissime, and L’Artisan Voleur de Roses are some of my favorites. I long to try CB I Hate Perfume and Lorenzo Villoresi’s patchoulis, too.

Scented sheets and pets: If you spray your sheets with scent and your cat sleeps on the bed, she will smell really nice. A few spritzes of Stella McCartney Stella or Thierry Mugler Cologne on the fitted sheet will do the trick.