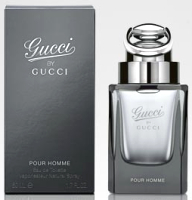 Like the women's version, Gucci by Gucci Pour Homme is a modern chypre; the notes include bergamot, cypress, violet, tobacco, jasmine, patchouli, amber and elemi. According to Frida Giannini, Gucci's Creative Director, she was intrigued by the elemi "...because together with the tobacco it turns up the intensity of the perfume".

Gucci by Gucci Pour Homme is available now directly from Gucci in the United States; it is to debut at Neiman Marcus in September (Update: make that Bloomingdales in August) and at other stores later in the year. The scent is sold in 50 and 90 ml Eau de Toilette and in matching grooming products. (quote via wwd, additional information via gucci) Another update: see a review of Gucci by Gucci Pour Homme.