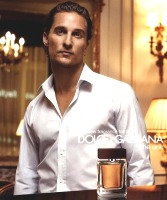 It’s spring — the perfect time to release ambery, spicy, oriental fragrances full of coffee, musk, cocoa, patchouli, ambergris and vanilla…right? I used to complain about sparkly “resort” citrus fragrances being released in October and heavy, rich scents coming out just before or during summer, but this off-season system of fragrance debuts has been a money-saver for me. I hold off buying fragrances I can’t wear immediately, so by the time cold weather rolls around, this spring’s and summer’s warm, wintry-smelling fragrance releases will have lost their gloss of “newness” and I can look at them dispassionately, and buy only fragrances I love (not simply like).

Dolce & Gabbana’s The One for Men (developed by perfumer Olivier Polge) has a cool-weather vibe; it contains grapefruit, coriander, basil, cardamom, ginger, orange blossom, cedar, tobacco and ambergris. The One begins with a strong (and predictable) citrus-spice accord that disappears within five minutes. I was stifling a been-there-done-that yawn when something interesting began to happen: The One started to smell like freshly baked cardamom cookies. The One’s ‘cardamom-ginger snap’ phase lasted 10-15 minutes and was enjoyable. About 20 minutes after I sprayed on The One, a strong sweet-sweat aroma began to emerge; this sweaty accord went where few perfumes/perfumers dare to tread — into the onion patch.

I don’t shun musky, “dirty” perfumes, but when an accord reminds me of scallions, I scrub — which brings us to Matthew McConaughey, The One’s advertising model. McConaughey is not my type, at least from the neck up, but he looks well-groomed and unusually “fresh” in The One ads. Anyone who reads the gossip rags knows that McConaughey’s notorious (undeodorized) armpits are almost as famous as his biceps, abs and pecs. (His leading ladies have been known to beg him to wear deodorant.) I wonder if Domenico Dolce, Stefano Gabbana and Polge got a whiff of McConaughey and were inspired by his manly odors…?

After its Allium stage, The One returns to predictability and ends with a pleasant vanillic-woody-musk accord — the accord that’s been present in about 80 percent of the new men’s releases I’ve smelled over the last 18 months. Tobacco-haters: the tobacco in The One is subtle, but noticeable and may contribute to the unwashed/sweat-chive stage of the fragrance. The One for Men has more character than many of the recent mainstream/designer launches I’ve tried, but I know now, without waiting for autumn, that I don’t need a bottle. (But I’d love someone to utilize that spice cookie accord in another men’s fragrance.)

Dolce & Gabbana The One for Men has average lasting power and perfect sillage for men (i.e., minimal). The One comes in a bottle that’s as heavy as a brick (I like it) and is available in 50 ml ($55) and 100 ml ($70) Eau de Toilette. The One’s bath and body products include aftershave lotion and cream, shower gel and deodorant. As of this writing, The One for Men is a Saks Fifth Avenue exclusive in the U.S.