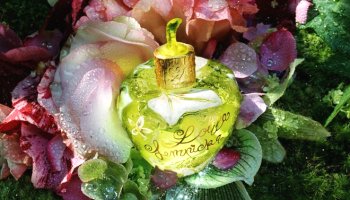 Lolita Lempicka Fleur Défendue / Forbidden Flower is the latest flanker to the original Lolita Lempicka fragrance. Like its parent, it was developed by perfumer Annick Menardo.

I said yesterday that Lolita Lempicka was a more floral take on the Thierry Mugler Angel theme; Forbidden Flower might be seen as a more floral take on Lolita Lempicka. The opening is similarly crisp, sharp and fruity (perhaps even crisper and sharper). It stays crisp long into the heart, which is less anise-y sweet than Lolita Lempicka's. The violet and iris are very soft — it feels more like a blended, indistinct floral with fruity accents. The warm, woody-earthy base from the original Lolita Lempicka is still there, but it is rendered lighter, cooler and paler, and as such, the link to Thierry Mugler's Angel is more tenuous. Despite the "almond musk" and "morello cherry musk" (other notes: absinth flower, strawberry leaf, mimosa, peony, violet, aniseed flower), Forbidden Flower has more of a fresh than a gourmand finish.

Forbidden Flower is pretty enough, and because it is lighter, softer and fresher, many people might find it a more wearable fragrance than the original Lolita Lempicka, especially in the heat of summer. To my mind, while I found nothing objectionable about it, it lacks the distinctiveness of the original — it doesn't really stand out from the gajillion other pale florals that have crowded the market over the past few years. That bottle, however, looks even better to me in green than it did in purple.