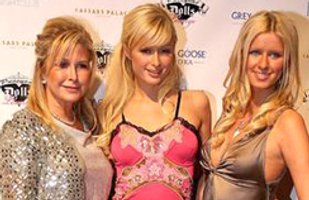 Want to spend a day with Paris, Nicky and Kathy Hilton? Earlier this year they held a contest in conjunction with the launch of Kathy Hilton's debut fragrance, My Secret, and a mother-daughter duo won a trip to Los Angeles to do just that. You can watch the results online:

Arriving this week to the web will be an exclusive mini-series, "A Day with the Hiltons," starring Kathy Hilton and her two daughters, Paris and Nicky...the series follows Kathy, Paris and Nicky, as they talk about beauty, family and much more while they visit a salon, attend an intimate brunch and spend the afternoon shopping.

The first installment should be available at the TVGuide channel at YouTube later today. (Update: here is the first episode) The press release also points to the historic import of Kathy Hilton My Secret:

This is a unique fragrance and event as no other mother has launched a perfume the same year as her daughter, regardless of celebrity status. It is truly a rare and special happening in the fragrance and celebrity market.

Actor Josh Hartnett will be the face of Giorgio Armani's next fragrance, Emporio Armani Diamonds for Men, due to launch this summer. (via wwd)

Rapper 50 Cent is rumored to be developing his first fragrance. (via cosmeticsinternational)