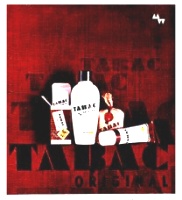 The German company Mäurer & Wirtz launched the Tabac Original fragrance in soap form in 1938. In 1955, Tabac Original, developed by perfumer Arturo Jordi-Pey, made its debut as a cologne. For years, every time I went to Europe, I would see faded advertisements for Tabac Original at tobacconists or pharmacies, and often, the white bottles of cologne would be “baking” in sunshine in the shops’ front windows. I assumed Tabac Original was “the European Old Spice” and went about my business – I didn’t need to sniff it. (My opinions of “cheap” — inexpensive — scents and Old Spice have since changed.) Tabac Original has dull packaging and is treated sloppily by shopkeepers, but the fragrance deserves some respect.

Tabac Original contains aldehydes (lots), black pepper, lemon, bergamot, neroli, petit grain, lavender, chamomile, geranium, oak wood absolute, carnation, sandalwood, vetiver, musk, and ambergris. Reading those ingredients, I expected a gutsy fragrance (the formula has no doubt changed since the Fifties), but what I got was a “lean”, flowery, clean and “soft” cologne. Tabac Original is a well-blended scent but does possess some distinct phases of development. Tabac Original starts with the aromas of creamy orange blossom, fresh lemon and pepper; these notes are lively but not jarring or ‘metallic’ like many citrus accords in today’s men’s mainstream fragrances. In mid-development, carnation continues the floral theme but the mix of lavender with geranium and other notes almost pushes Tabac Original into fougère territory. Hours after applying Tabac Original, my skin smells of cloves and light-as-air musk with a hint of vanilla.

I hated getting my hair cut as a child, but now, when I smell anything that reminds me of a barbershop (bay rum, citrus-floral talcum powders, clove-scented soap, lavender water), I’m filled with nostalgia — even for the brusque barbers who gave me dated crew cuts and then slathered my head with sticky, licorice-scented pink pomade. I’ll keep a tiny bottle of Tabac Original handy and sprinkle it on when I want to revisit the smells of a classic barbershop. Tabac Original’s barbershop vibe, soft aldehyde-florals, and well-mannered woods and musks may be too “feminine” or “old fashioned” for some men (the same men who complain about Jean Paul Gaultier’s Fleur du Mâle). I asked friends to sample Tabac Original and they said “a woman can wear this,” “I smell alcohol!” (the aldehydes making their presence known) and, worst of all, “I think an old man would like it.” If you’ve read many of my reviews, you know I get riled when people describe (dismiss) a scent as smelling like an OLD lady or an OLD man but I’m sick of fighting that battle; it seems perfumes that don’t smell “of the moment” are “OLD fashioned” to a majority of people and they limit their perfume palette severely. Pity ‘Em, Don’t Fight ‘Em is my new motto.