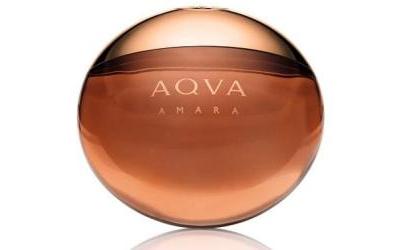 …part of a larger strategy to promote the best-selling Aqva and Omnia lines as high-end creations “developed for a larger audience…. We are working very hard to try to elevate what are considered the ‘entry’ product lines. There are two possible approaches here: either you treat the fragrance as a big commercial blockbuster, or you say, no, we want to treat this like a very precious object.”2

The trouble with this strategy, when it comes to the Aqva line at least, is that the perfumes don't smell “high-end.” Original Aqva Pour Homme has its moments, but it smells more like a blockbuster wannabe than an expensive niche creation.

Aqva Amara opens with a citrus and menthol-y (eucalyptus?) accord; the accord is not strong; it’s light and smells ‘diluted.’ A fruit and neroli accord appears next (and this fruit and neroli smell 'middle-market'). At this point, I was really disappointed. Thought bubble: “A dash of citrus-y menthol, with light orange and neroli…how original!”

Then, Aqva Amara got my attention. Out of the blue came a musty, salty mineral note (accompanied by an ozonic/water accord). The mineral note intensified and caused the ozone to dissipate, and I was amazed that I started to smell like wet, funky marsh mud! The damp mud aroma gave way to more seaside notes…some smelling like driftwood, others like tar-smeared, water-soaked pilings. And almost as quickly as these unusual notes appeared and made me smile…they faded. Back came the water-ozone and some sanitized patchouli. The base of Aqva Amara (it lasts and lasts on skin) reminds me of a weaker version of John Varvatos Artisan…but made with neroli instead of orange blossom.

If I were Bvlgari’s creative director of perfume, I would INSIST that its stash of ocean perfume notes (quite realistic and fun) be intensified and showcased in a fragrance. Why always make those cool, marine accords — smelling of seaweed, salt water, and dry, sun-bleached, salt-scoured woods — recede from smell? Frustrating.

Aqva Amara has some flashes of interest, but it’s like a weekend rebel — a guy who shows his wild side only on Saturday night, or when no one he knows is looking. Aqva Amara should have left the normal stuff in the background and let the bold, crazy notes shine.