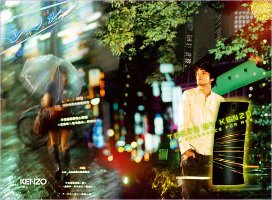 Tokyo at night, especially on a rainy night, can be a nightmare for an astigmatic like me: lights everywhere, lights reflecting off metal, slick roads, sidewalks and glass. Everything is a blur. Perhaps Kenzo Parfums believes only a YOUNG man can navigate the sprawling, complex landscape of Tokyo, because Tokyo by Kenzo, their latest fragrance release, was created for men 18 to 25 years old.

Tokyo by Kenzo opens with ginger, lemon and a fragrance note that smells like brewed green tea. The green tea note disappears quickly and one has to strain to detect maté. The next stage of Tokyo by Kenzo is mildly “sweaty” (grapefruit, light cedar, shiso); someone, 18-25 years old of course, wearing a citrus scent, has been scurrying about humid Tokyo all day and he needs a shower. Then, Tokyo by Kenzo fades away, leaving only the lightest trace of lemon on the skin. Tokyo deserves a better tribute scent.

Remember in early spring when ‘perfume people’ were so excited about the upcoming men’s late-summer and autumn fragrance releases — even the mainstream releases? None of the new designer scents lived up to their hype; all are rather ordinary and predictable. I was initially put off when Kenzo Parfums announced their new scent was for men much younger than me. How dare they! But now I appreciate the wisdom of Kenzo: only a young man who hasn’t worn many perfumes would find a scintilla of interest in Tokyo by Kenzo. Color-coded fragrance notes and an elaborate ad campaign can’t salvage Tokyo by Kenzo; to me, it’s the blandest of the big 2007 men’s fragrance launches — so far.

Tokyo by Kenzo was created by perfumer Marie Salamagne and its bottle, box and layout for press ads was developed by Kashiwa Sato. Tokyo by Kenzo is available in 30, 50 and 100 ml Eau de Toilette and in matching grooming products.