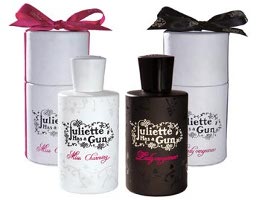 The whole idea of niche fragrance is to offer something special and different, something you can't find on the perfume counter at your local Macy's. The best sort of niche perfume house, presumably, will put artistic integrity before mass appeal. I came to perfume addiction via niche, as it were, and I'm still an easy target: tell me you've got an incense by Bertrand Duchaufour made with the best possible materials or Jean Claude Ellena re-engineering lavender at the molecular level or Aurelien Guichard conjuring up 1960s pop culture, and I'm there.

But niche, like luxury, has become so ubiquitous as to lose its cachet. So many niche lines have cropped up in the past two years that I can hardly keep them all straight, and frankly, some of the twaddle meant to convey their "artistic integrity" is more annoying than the sparkle-and-sex-appeal ad copy we see from the conglomerates. I used to be willing to jump through considerable hoops in order to try the latest, hottest niche fragrances, now I get considerable satisfaction out of deciding to ignore whole lines. Nasomatto finds it beneath them to share the fragrance notes with their customers? Indult won't sell me a bottle of Tihota unless I join the "Indult Club" by purchasing one of the first 999 bottles? Whatever. I've plenty of other fish to fry, and if the juice is that great, it doesn't take a strip tease to get my attention.

Juliette Has A Gun came on the scene in 2006. They've got everything a new niche line needs — the background (the line was founded by Romano Ricci, grandson of Nina Ricci) and the stand-out-in-a-crowd backstory (rose perfumes inspired by Shakespearean heroines) and the talent (the first two fragrances, Miss Charming and Lady Vengeance, were developed by perfumer Francis Kurkdjian) and the playful but appealing packaging. They're expensive but not outrageously so ($80 for 50 ml). The line's raison d'être: to "lead a new rock & elegant trend in the perfumery world, by creating romantic and original creations. Hostilities in progress."

Miss Charming, which features Moroccan rose, wild strawberry, lychee and musk, is a perfect fit with its name: a dewy little rose, fruity and sweet and pink at the start. It is nicely done, but the opening is perhaps a bit too charming for my taste. Later, the dry, earthy-mossy base starts to peek through and add a bit of an edge, and then I like it much better. Still, this sort of thing has been done. If you're looking for dewy and charming, you've much of the Les Parfums de Rosine line to play with, and on MakeupAlley, you'll find many comparisons between Miss Charming and Bond no. 9's Bryant Park.

Like Miss Charming, Lady Vengeance makes a nice conceptual fit with its name; you could smell these blindfolded, and easily enough figure out which was Charming and which wasn't. This is a darker take on rose, with vanilla and patchouli, but it isn't overly dark or overly edgy. The base is earthy-woody but smooth (and not altogether different from Miss Charming's — after a couple hours, they are more similar than not on skin), and while Lady Vengeance is more dry than not, it has enough vanilla to make it easy to wear, and it isn't as sultry (or vengeful) as some other rose-patchouli perfumes.

Of the two, I like Lady Vengeance the best, and I'd wear it quite happily if I had a bottle. Still, while both of them are nice enough, they are lacking something, some element of surprise, or daring, or something. These are just not particularly adventurous or unusual fragrances, and so while I might be impressed if they'd come from some more mainstream brand, as the flag bearers of a yet another new niche fragrance line, they leave me cold. "Hostilities in progress" promises far more audacity than the line has delivered, at least so far (reportedly, there are three more fragrances to come).

Side note: fun if you're bored at work, the Shakespearean Insulter.