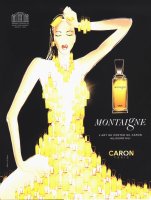 Back in May, I reported that I had not bought a single bottle of perfume so far in 2007. That didn't hold true for long, but unless I fall prey to a vicious lemming between now and the end of the year, I'll end up with a total bottle intake of 7*. Not too shabby for an addict, and about the same as I did last year. In 2005, I bought 11 bottles, and we're not even going to talk about my shameful, completely out-of-control intake in 2004 (let's just say that most of my perfume collection was purchased in 2004).

A few random factoids about this year's spending: I bought 3 of the 7 bottles at full department store prices, something I haven't done in years (and a practice I wouldn't encourage, although so far, only 1 of the 3 has appeared at the discounters). 1.5* of the 7 bottles were purchased unsniffed. And every single one of the 7 bottles was a mainstream fragrance. Last year, almost everything I bought was niche. This made a big difference in the total cost. My total outlay for 2007 was $255; I don't have exact records for 2006, but as near as I can estimate, it was closer to $400.

Part of what keeps my expenditure low (if you're willing to call $255 low) is that so many very kind people send me decants and samples, so I'd like to take this opportunity to thank everyone I've swapped with, and everyone who has sent me raoks***. If you're spending too much on fragrance and find that you don't manage to use up what you buy, swapping is the really the way to go. Way back in April, when I wrote about how to get fragrance samples, I added "Swapping article is coming up next week!", which turned out to be a huge lie. I promise to get to that early in the New Year.

So, time to play true confessions: how many bottles did you buy this year? If you'd rather not 'fess up in public, just tell us if you had a budget for 2007 and whether or not you managed to stick to it.

Note: advertising image for Caron Montaigne (it is hard to tell, but her "dress" is made up of perfume bottles) via the forums at Images de Parfums.

*Strictly speaking, I bought 6 full bottles and 2 minis, and I'm counting the 2 minis as 1 full bottle. A bit of fancy accounting, perhaps.

** A MakeupAlley acronym for a random act of kindness, e.g., someone who sends you a sample/decant/bottle just because they are really nice.