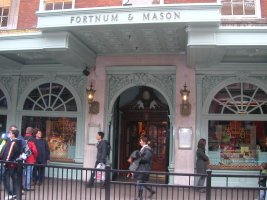 Say the words ‘Fortnum & Mason’, and I defy you not to get a mental image of food hampers packed with foie gras. Fortnums has become pretty much synonymous with the provision of superior groceries since its founding at the beginning of the 18th Century. What’s less well known is that it sells lots of other luxury goods, including high-end perfumes.

From the outside, Fortnum & Mason is so fairy-taleish, with its pale blue portico and its musical clock, it looks more like something knocked up for a film set than a real store. I’d place it just below Liberty in the spontaneous giggle league. It’s certainly a must-see for tourists. Unlike most department stores in London, the fragrance department is not on the ground floor. Instead, you step off Piccadilly into the food emporium, with glittering displays of chocolate and tea. The perfumes are all the way up on the second floor.

It’s a very light and uncluttered space, a refreshingly calming experience after the hustle of ground-floor perfumeries almost everywhere else. (Why don’t more shops put the fragrance department somewhere that’s not on the way to the rest of the store?) 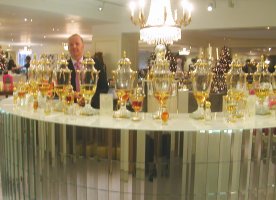 Fortnums is the only place in London, other than Harrods, that has a range of Caron urns. They’re beautifully displayed, and James, behind the counter, knows his stuff and is eager to chat. (We had an intense discussion about the Etat Libre d’Orange line; the range is coming to Harvey Nicks but we agreed that the chances of it fitting the image of Fortnums were remote.)

I should point out that Fortnum & Mason is a bit of a dress-up place. Not that they’d throw you out for wearing athletic shoes or anything, but I suspect four-season rucksacks and muddy boots would look pretty noticeable, you know what I mean?

Caron best-sellers: “People come in looking for Tabac Blond, because they’ve heard so much about it. But they usually buy something else. Pois de Senteur is popular, as is French Cancan and N’Aimez que Moi”.

Don’t miss: The musical clock, above the main entrance on Piccadilly. It chimes every fifteen minutes, but the good bit is on the hour, when two 4-foot models of the original Mr. Fortnum and Mr. Mason come out and bow to each other, to musical accompaniment. It weighs four tons, and, contrary to appearances, is not ancient. It was installed in 1964.

Nearby: A minute’s walk west, on the same side of Piccadilly, is The Ritz. You can peer in at the liveried footmen, or book ahead and have ‘Tea at the Ritz’ — about £85 for two. Directly opposite is the Royal Academy of Arts. You’re also within five tempting minutes’ walk of Ormonde Jayne, in the Royal Arcade.