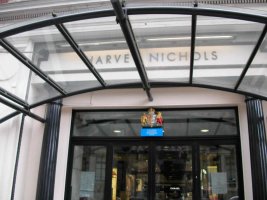 This 19th century department store was famously the favourite shopping destination of Princess Diana. You can see why — five floors of fashion include every major designer from Armani to Zac Posen, taking in Jimmy Choo and Christian Louboutin on the way. Luckily for perfume fans, the cosmetics and fragrance department occupies most of the ground floor. Even luckier, Knightsbridge tube station delivers you as close to a spritz of Robert Piguet’s Baghari as it could possibly manage without actually emerging inside the store.

Although Harrods, a little way along Knightsbridge, tends to get the pick of the ‘exclusives’, Harvey Nicks is more compact and feels friendlier (you’re more likely to get hold of a sample here). Even more importantly, there is a niche perfume paradise on the fourth floor, hosting a treasure trove of brands which are hard to find in one place anywhere else in London.

The ground floor is the place to find Big Names. Here you’ll find the Dior colognes, Chanel Rue Cambon, Serge Lutens, Creed, Bond No. 9, Tom Ford Private Collection, and niche lines such as Escentric Molecules. There’s also a small SpaceNK area, where you can find a modest Diptyque range and occasional oddities such as Norman Hartnell, and a Shu Uemura boutique.

Don’t wear out your nose until you’ve made a trip to the fourth floor (on the way, check out the Bottega Veneta scents on the first floor). Here there’s an area called ‘la Forêt de Parfum’ , where you’ll find il Profumo, Maître Parfumeur et Gantier, Nelly Rodi, Parfums DelRae, Parfum d’Empire, Miller et Bertaux and Laura Tonnato, among many other mouthwatering niche excitements.

As with most London department stores, there’s no aggressive spritzing from the sales associates, and you are left to sniff and spray to your heart’s content.

Note that if you use the toilets (in some London stores the ladies toilets are still called ‘Powder Rooms’), you are likely to be expected to make a small contribution to the toilet attendant’s collection plate. You needn’t be extravagant — 20p is perfectly OK.

Not to be missed: Take a trip to the foodmarket on the fifth floor, where there are goodies from all over the world (you’ll get a Harvey Nicks bag even if you only buy a bottle of water). There’s also a café there.

Getting there: Harvey Nichols, 109-125 Knightsbridge, London SW1X 7RJ, call +44 (0) 207 235 5000. Walking west from Hyde Park Corner, it’s about a third of a mile along the south side of Knightsbridge. By tube; take the Piccadilly line to Knightsbridge. When you emerge onto the concourse, there are two exits, marked ‘Harvey Nichols’ and ‘Harrods’. Both deposit you right outside the stores.

Nearby: Harvey Nicks is on the corner of Sloane Street (from which the term ‘Sloane Rangers’ came), where all the big name designers have flagship stores. Shop here for Armani (and the Armani Privés), Chanel (and the Rue Cambons), Prada, Fendi, and…well, you get the picture. There’s also a Jo Malone store, about quarter of a mile down on the east side. Five minutes’ walk west from Harvey Nichols is Harrods — it’s on the same side of Knightsbridge. There’s a large SpaceNK store in Hans Crescent, which runs alongside Harrods. You’re also not far from the Albert Hall, Albert Memorial, Hyde Park and Kensington Palace.