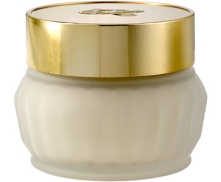 There is an often-told anecdote about Youth Dew. In the 1960s, Estée Lauder visited the Galeries Lafayette in Paris with a proposal for opening a counter there; however, the department store’s buyers were not interested in carrying her products. On her way out, the story goes, Estée not-so-accidentally spilled some Youth Dew bath oil on the store’s carpet. So many customers noticed the resulting aroma and demanded to purchase the oil that the store relented and placed an order for the entire Lauder line. As Angela has pointed out in her review of Youth Dew, its sillage is just as potent now as it was decades ago. I own and love the Eau de Parfum, but when I prefer to keep Youth Dew’s rich, retro spiciness all to myself, I wear the Body Creme instead.

Youth Dew Perfumed Body Creme is the heaviest lotion I’ve ever owned, literally: its jar of ribbed, frosted glass is weighty enough to cause severe pain if dropped on an unsuspecting foot (although, I suppose, a true Youth Dew wearer would be sure-handed enough never to drop it). Its lid is gleaming gold, as shiny as the interlacing initials of the Estée Lauder logo embossed on the pale turquoise and white box.

The Body Creme’s fragrance is true to the scent of the Eau de Parfum: that is, neither youthful nor dewy. It has Youth Dew’s signature blend of cinnamon and clove notes, something like a more stylish version of church incense, which softens into a cocoon of amber and patchouli. The scent of the creme lingers close to the skin, unlike the waves of sillage sent off by the Eau de Parfum. Its character is still bold, but somehow more private.

The creme itself looks faintly pearlescent in its opulent container, and it is luxuriously thick to the touch. Because it smells and feels so rich, I was surprised to discover that it absorbs without any stickiness. I was not surprised, however, to notice that the fragrance endured most of the day. It might be a lotion, but it’s still Youth Dew.

Youth Dew Perfumed Body Creme sells for $27.59 for a 6.7 oz. jar at department stores or esteelauder.