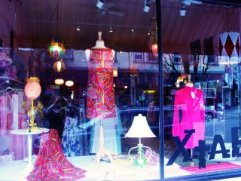 A little before noon I arrive for work at Xtabay, a vintage clothing store in my neighborhood, and go to the bar next door to get the key. My main source of income has dried up for an unknown number of weeks, but by chance, Liz, Xtabay’s proprietress, needed someone to work weekends. I lug the sale rack out to front of the store, put out the sandwich board, light a few scented candles, and cue up the Brazilian music.

The first customers of the day are a high school girl and her father who drove in from a farming community west of town to find a dress for the girl’s homecoming dance. She looks about fifteen, wears jeans, a fleece hoodie, and glasses, and has her hair pulled back severely. No makeup. When I ask her what sort of dress she has in mind, she’s vague. “Oh, something fun. You know, semi-formal. Maybe something bright.” She flips through the racks while her father waits patiently by the door. I see her fingering silk, décolleté cocktail dresses, trying on the idea of womanhood. I think she’d be happy with the lilies and musk of Narciso Rodriguez.

A couple of housewives from the West Hills, slumming it on the eastside, park their BMW SUV rigged with baby seats out front and wander in. Lanvin Rumeur and YSL Paris (has loved it from college) are my guesses. Rumeur models a gorgeous 1950s cotton batiste tiered dress with a matching ruffled shawl. She complains that she’s bloated, has been on vacation and eaten too much, etc., but the dress fits like it was made for her, giving her a gorgeous waist. She hems and haws and finally puts the dress on hold, saying that her husband wouldn’t want her to spend the money, although I have a hunch that her highlights cost three times as much as the dress. She never comes back for it.

A little while later two loose dogs run into the store, chasing each other, tongues flapping, and I yell and point to the door. They run out and disappear up the street.

A couple comes in the store, he with pink hair and she with blue hair. She’s a little bigger than he is and voluptuous, and she tries on an armload of cocktail dresses. She models each dress for her boyfriend (the blue chiffon number looks great with her hair), and when she likes a dress she dances around in front of the mirror and shimmies toward her boyfriend. They seem really happy to be together. I have a hunch she’s a stripper, and that hunch strengthens when she has change for her boyfriend’s hundred-dollar bill when he buys her a 1940s black eyelet dress. I think she probably wears Angel, but I’d love to smell her in The Different Company Rose Poivrée. I’m guessing that her boyfriend would like a bottle of Hai Karate because it would crack him up. They come in the next day to buy a lipstick pink charmeuse dress, and he pays for this one, too, with another hundred-dollar bill.

While I’m fiddling with the music (yes! the BeeGees!), my lunch arrives from the bar next door. The brunette, tattooed waitress who drops it off is wearing a 1970s royal blue dress that she bought here the day before, and it makes her skin glow. She’d be divine in Patou Joy.

Late in the day, a small woman with vivid blue eyes cruises in. Within ten minutes she has pulled the five best things in the store to take with her in the dressing room. She has impeccable taste. She’s the ex-girlfriend of a famous rocker (you’d know him) and the wife of a nearly-as-famous writer (you’d probably know him, too). I pretend not to know her so I can appear extra cool. She recognizes me right away and is very gracious. She buys a sailor-styled blazer with gold buttons and little anchors on the lapels. I think of her as wearing Penhaligon's Bluebell, because I heard that Kate Moss wears it, but she’d be great in a piercing green chypre that dries to skin, like Carven Ma Griffe.

After selling a gold sequined cocktail dress and a wool knit skirt to two women who’d had a few beers next door, I drag the sale rack in again, blow out the candles, and lock up the store. I’m bushed. It’s time to go home to a quiet evening and a few drops of comfort. No, I don’t mean a glass of wine. I was thinking Nuit de Noel.