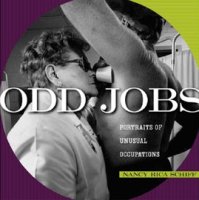 I come from enterprising stock. Growing up, I learned that there’s no shame in work, and that a mix of crafty frugality and willingness to do just about anything that pays will see you through most hard times. I’ve already filled you in on my weekend job at a vintage clothing boutique. Now I’d like to tell you about some of the other ways I’ve earned money over the past four weeks while I look for a job, and the perfume I’ve chosen along the way. I hope you’ll help me choose a few scents to make it through the next few weeks, too.

Femme à tout faire, Busy Corner Café: The Busy Corner was a lot less busy before a party of 35 people came for lunch and the dishwasher broke. Fortunately, the owners are easygoing, and while they cooked Spanish-inspired food for lunch, I kept an eye on their three-year old daughter, chopped onions, ran to another restaurant to pick up baguettes, and — yes — did more dishes than I’d seen in a long time. I chose L’Artisan Piment Brûlant to wear because I thought it would blend with the Dahlia brand paprika sprinkled on the tapas.

Copywriter, invitation for a “Grange-style supper” cooked by a classically-trained French chef: What perfume goes with both Midwestern farm life and haute cuisine? I chose Parfums de Nicolaï Vie de Chateau. Besides a tidy fee, I earned a dinner invitation for this job.

Transcriber of oral histories: Between other jobs, I’ve been transcribing cassette tapes of interviews with septuagenarian Catholic mothers, all of whom bore five or more children. The machine I use lets out a high-pitched squeal intermittently about halfway through each side of each tape. This squeal combined with the harrowing (to me, at least) tales of rearing so many children set me running for a calm fragrance. Lorenzo Villoresi Alamut is the comfort that I need.

Writer of two magazine articles: One article is about an internet business, Tarot.com, and the other is a short history of “invalid cookery”. For the Tarot.com interviews, I should have chosen something with identifiable patchouli (maybe L’Artisan Voleur de Roses) but two out of three of the interviews were on hot days so I wore Parfums de Nicolaï Eau Exotique. Eau Exotique actually does pack a little patchouli, come to think of it. I haven’t started the food for invalids history yet, and I’m open for suggestions for perfume to wear while I research it. Do you know anything that smells like milk toast?

Untangler of medical insurance issues: I’m actually making a little money helping contest someone’s medical bills. It’s not so bad when it’s not your own medical bills, but dealing with the insurance company has been absurdly complicated and could fuel New Yorker comics for years. Any suggestions for a scent? For my next call I might try Lorenzo Villoresi Yerbamate for its puzzling mix of antiseptic and sweet, powdery notes.

Delivery person, local food magazine: Later this week I’ll be spending two days driving around town and dropping off boxes of magazines to supermarkets. I’m thinking that L’Artisan Dzing! might be a good choice because of its cardboard smell, but if the weather is warm it could overwhelm. Piguet Bandit is a sharp, clear leather that would mix well with the oily smell of my truck. L’Artisan Fleur de Carotte could be a winner, too.

Temporary office worker: I know it’s dangerous to wear perfume to a strange office, but a discreet spritz of Balmain Jolie Madame never hurt anyone. For a few days this week I’m a receptionist for an office of lawyers. If they don’t like the scent, I say let ‘em sue me. Overall, to calm anxiety and feed optimism, I’ve been loving Serge Lutens Chêne. Mornings are just starting to smell of autumn now, cool and damp, and Chêne’s warmth and solidity bucks me up and reminds me that tough times don’t last forever. With any luck, soon I’ll be reaching for perfume that smells like money. Any suggestions?

Note: image, cover of Odd Jobs: Portraits of Unusual Occupations by Nancy Rica Schiff, and yes, that lady is sniffing out how well underarm deodorant works, something Angela hasn't had to do — yet. Check it out at Amazon.