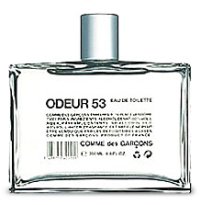 ...it comes from `noses' at the laboratory of International Flavour and Fragrance, and was commissioned by Rei Kawakubo of Commes des Garcons, who is launching it to an unsuspecting public on 11 May.

As a concept, it redefines the whole idea of modern perfume, and the smell is unique too, which is rare. The IFF describes it as `53 abstract notions evoking images, creating your own air around you,' and `a memory of a smell', and after spritzing it around it does seems more akin to a breath of fresh air than an actual smell. This is because it has been made by chemically recreating 53 inorganic smells, such as sand dunes, fire energy, washing drying in the wind, burnt rubber and the freshness of oxygen, using a method which takes nothing from nature, and thus is truly environmentally friendly. (via The Independent, 5/6/1998)

Comme des Garçons launched Odeur 53 in 1998. I will leave it to the folks at the Fragranced Products Information Network to rule on the "environmentally friendly" claim, but Odeur 53 continues with the irreverent approach to perfumery established by its predecessors in the line (Comme des Garçons Eau de Parfum, White). Perfumers Martine Pallix and Anne-Sophie Chapuis were reportedly given a brief that called for "abstraction" (Ibid, 9/20/2003); what they came up with includes (in addition to the "notes" listed above) freshly mowed grass, flash of metal, mineral carbon, nail polish, cellulose, pure air of the high mountains, ultimate fusion and flaming rock.

The result is a highly wearable, more-clean-than-not fragrance that is often referred to as a skin scent, surprisingly enough for something that contains no natural components whatsoever. According to Victoria of Bois de Jasmin, the primary ingredient in Odeur 53 is hedione, the diffusive, jasmine-like synthetic that was first used in appreciable amounts in Christian Dior Eau Sauvage. Odeur 53 is too weightless to recall anything like a real flower, but something like the idea of jasmine floats through the airy, transparent blend. Of the other notes, well, I can't find anything like flaming rock or burnt rubber, but there is a definite metallic twang, and certainly a touch of cotton drying in the sun. The nail polish is perhaps evident in the alcohol-heavy opening but it doesn't last. Later, there is a vague hint of something like Lemon Endust.

It is hot here today, and the humidity is approaching 95%. Odeur 53 wears perfectly in this kind of steamy weather, managing to stay crisp and cool without calling to mind air freshener or laundry detergent. And like many of my favorites from the line, it combines wearability with just the right touch of weird — it has all the playfulness that is missing from Play.