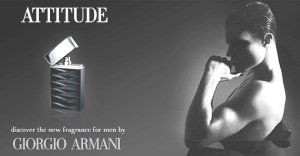 Menardo (Boucheron Jaipur Pour Homme, Bvlgari Black), Morillas (Bvlgari Omnia, Yves Saint Laurent M7) and Cresp (Thierry Mulger Angel) have all created interesting and original scents, so why did it take all three of them to come up a conventional fragrance like Attitude?

Attitude has a lemon-and-coffee opening that reminds me of an unfortunate incident that happened in my kitchen years ago. Friends were visiting from Los Angeles, it was a hot day and I had the bright idea of spiking a freshly pressed carafe of coffee with two lemons’ worth of lemon slices and ice cubes. I created a brew that could strip tooth enamel in an instant and made stomach acid seem weak in comparison. One friend drank an entire cup of my lemon coffee before holding her stomach in agony. Attitude’s opening doesn’t cause me physical pain, but it’s a bit too strong for my liking (maybe I just don’t think lemon and coffee smell good together).

After Attitude’s powerful opening, one gets a pleasant whiff of cardamom and lavender (both easily recognizable) before the scent moves into its best (and final) phase. Attitude’s base notes are cedar, patchouli and (I think) vanilla; the base has a “coffee-amber” aroma. All the base notes are smooth, pleasant and slightly sweet.

Armani Attitude is being introduced in spring but it feels like a fall/winter scent to me. Even with its rather ‘strong’ notes, Attitude’s lasting power is mediocre; after the first 10 minutes it stays very close to the skin and disappears within a few hours.

Attitude’s “cigarette lighter” bottle (designed by Fabien Baron) seems to have no connection to what’s inside it; and how does it relate to the ad campaign? Armani Attitude’s “The Thinker” model has the shiny hair and smooth skin of someone who has never smoked a day in his life. There seems to be no desire at Armani to create original ‘statements’ with its lower-priced, mainstream fragrances — it can be done, using any of the three talented perfumers who concocted Attitude.

Giorgio Armani's Armani Attitude is available in 30, 50 and 80 ml Eau de Toilette ($39-$65). It is widely available now at department stores, and will no doubt be at the online discounters by the end of the year.