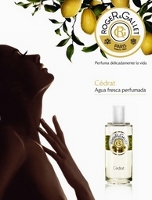 Stetson will launch a second fragrance fronted by country music star Shania Twain this September. Shania Starlight by Stetson follows 2005's Shania by Stetson, and is intended to "show off a different side of Twain...aiming for a more feminine scent not so closely associated with country music".

Developed by Givaudan's Caroline Sabas, the fragrance is described as a "fruity floral" with top notes of mandarin and lemon, apple blossom and white freesia; a heart of star magnolia, dewy gardenia, night blooming jasmine and musk, and a drydown of creamy sandalwood, cashmere woods, sugi wood, tonka and amber.

Shania Starlight by Stetson will be available in 15, 50 and 100 ml Eau de Toilette and in matching body products. (quotes via Women's Wear Daily, image via casatwain)