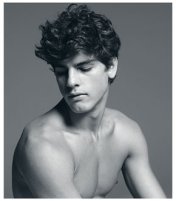 The new fragrance was developed by perfumer Francis Kurkdjian, who also worked on For Her. For Him takes its cues from "the great fougères of the Eighties", and will feature musk, amber, violet leaf and patchouli notes.

Narciso Rodriguez For Him will be in a grey bottle similar to that of the women's fragrance, and the range will include 50 and 100 ml Eau de Toilette, Fragrance Oil and matching grooming products. (quote via Women's Wear Daily, additional information via cosmeticnews)

For anyone who missed it, Narciso Rodriguez recently signed an agreement whereby Liz Claiborne will acquire 50% ownership of the line, which had been struggling financially. (via fibre2fashion, Houston Chronicle)

Update: see a review of Narciso Rodriguez For Him.