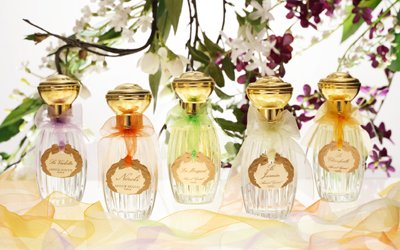 Le Jasmin is one of a series of soliflore fragrances from Annick Goutal (others include Le Muguet, La Violette, Le Chèvrefeuille and Néroli). It was originally released as a limited edition in 2004, and has been recently relaunched, again as a limited edition. Like the others, Le Jasmin was created by Camille Goutal in collaboration with perfumer Isabelle Doyen, and the notes include jasmine, magnolia and ginger.

A commenter yesterday described Serge Lutens A La Nuit as "moist, humid, sultry, alive", and those four adjectives neatly sum up its character. It is a jasmine-lover's jasmine, and as much as I love it, "easy to wear" isn't the first phrase that pops to mind. Le Jasmin is an entirely different sort of jasmine soliflore, and whether you love it or hate it, I don't think anyone could compare the experience of wearing it to being buried alive in jasmine petals. Annick Goutal calls it "fresh and sparkling", and I would add "playful and light" to that list.

Le Jasmin opens on a whoosh of fizzy ginger. A spray from a fresh bottle tickles the nose like just-poured gingerale, while a dab from an (older) carded sample shows a bit less effervescence. Either way, it relaxes into a bright, summery floral blend, lightly sweet and more soft than not, with just a touch of ginger lingering on to spice up the proceedings. It is dominated by jasmine, but does not, like A La Nuit, feel sultry, or like you've landed in a hothouse with all the windows closed. It is pretty rather than sexy, and if it has an attitude, it is casual. It certainly isn't something that needs to be reserved for after the sun goes down.

I like Le Jasmin. It is pleasant and easy to wear, and while those terms are sometimes used as shorthand for dull and inoffensive, Le Jasmin is hardly that: it is lively, and not at all run-of-the-mill. Still, I've never been as captivated by it as I am by A La Nuit, or even by Le Chèvrefeuille, which is by far my favorite of the Annick Goutal soliflores. The lasting power is so-so, but I don't find A La Nuit to be stellar in that regard either.