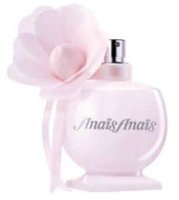 In April, Cacharel will launch Anaïs Anaïs Flower Edition, a limited edition bottle of the iconic 1978 fragrance (the juice is the same) with white lily, orange blossom, rose, hyacinth and sandalwood. The vintage-look bottle was designed by Patrick Veillet, and can be found in 50 ml Eau de Toilette. (via femistyle.be, osmoz)

Miss Dior Cherie Eau de Toilette is available in 50 and 100 ml, and can be found now at Sephora in France; it is to launch worldwide over the coming months. (via moodieport, lingerie.it)