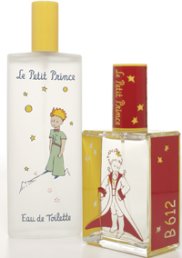 Perfumes for young children have long been popular in Europe, but are only recently making inroads in the United States. Sales are expected to increase over the coming years as "childhood is increasingly going couture". The idea has yet to catch on in my own house: my son has no interest whatsoever in fragrance, much less couture fragrance, and could not even be tempted by Spongebob Eau de Toilette. If Nickelodeon cannot make a scent to please him, it is a hopeless case.

I suspect that many of the children's fragrance purchases in the US are intended as gifts, in which case you could do no better than one of the fragrances by Le Petit Prince, which are as heavy on the charm factor as anything you're likely to encounter in a perfume store. The line is, of course, based on the much beloved 1943 novel by Antoine de Saint Exupéry, and if you are a fan, you cannot fail to be entranced by the adorable packaging.

Le Petit Prince (bottle on left) is a unisex fragrance featuring mandarin, orange, tarragon, verbena, freesia, lily of the valley, cedar and oak. The first spray is juicy citrus, after that, it is heavy on the verbena, light on the herbs, flowers and woods. It is a perfectly respectable citrus fragrance; an adult could wear it without shame, but the lasting power is perhaps not quite so good as an adult might expect. All the same, it is perfect for a summer refresher, and would make a nice introduction to fragrance for a child. Le Petit Prince is available in alcohol or alcohol-free versions, both in 100 ml of Eau de Toilette; there is also matching shampoo, body lotion, soap and bath flakes.

Le Petit Prince B612 (bottle on right) is for little boys, and is named for the asteroid where the Little Prince lives. The notes include tangerine, lemon, grapefruit, orange, mint, jasmine, moss and musk. This is a more masculine fragrance than Le Petit Prince, but also milder: after a little burst of citrus and mint, it calms to a very soft woody musk. This one comes only in an alcohol based Eau de Toilette spray, 100 ml. As I said above, all of the packaging in the line is simply adorable, but this bottle is easily my favorite.

La Rose du Petit Prince is the entry for young girls, and has notes of clementine, orange, bitter orange, grapefruit peel, carrot and celery seeds, tea, rose absolute, moss, amber and cedar. La Rose is a fresh rose, very soft and dewy, with hints of light citrus and a whisper of vegetal green over an woody-amber base. It is light enough that a young girl could spray it on with abandon and still not create much sillage, but the lasting power is reasonable. The bottle features an image of the Little Prince standing next to his rose and has a pink ribbon around the neck. It comes in an Eau de Toilette with alcohol, body lotion and bath gel.

All of the fragrances in the Le Petit Prince line are to be officially launched in the United States this coming October. For shopping information, see the listing for Le Petit Prince under Perfume Houses.