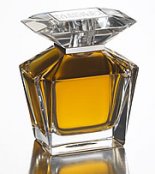 Elizabeth Arden has acquired most of the fragrance licenses held by Canadian company Riviera Concepts. Fragrance lines which will go to Elizabeth Arden under the deal include Alfred Sung, Hummer, Nanette Lepore, Cynthia Rowley, Lulu Guinness and Bob Mackie. Also included is the upcoming fragrance from Badgley Mischka (bottle shown at right). Riviera Concepts will continue to hold the licenses for Adrienne Vittadini and Hang Ten. (via cosmeticsdesign and cosmeticsintl)

Kannauj, India, once an important market center for the distillation of sandalwood and rosewater, is losing its prominence. The town...

...at one point of time stood at par with Grasse, of France, the birthplace of modern perfumery. It is now lagging far, far behind.

Of 21 sandalwood oil distilleries, 19 have shut down, while the remaining are functioning with cheaper African wood.

Read more at cities.expressindia, or take a look at how Kannauj's perfumers were doing back in 2001, when 10 sandalwood distilleries were still in operation.