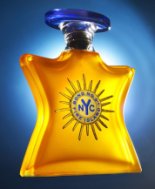 As previously reported, Bond no. 9 will launch Fire Island on July 1. The fragrance was created by perfumer Michel Almairac, who also developed Bond's recent Scent of Peace. The inspiration? Lying on the beach at, obviously, Fire Island:

To make Fire Island authentic, we took a risk and summoned forth the distinctive spicy-sweet aroma of the most sought-after of vintage Euro-bronzing oils — whose iconic smell has wafted all across the Mediterranean, summer after summer, for decades, defining the body on display, with its daydream hints of sex on the beach. (via press release from Bond no. 9)

Notes include cardamom, ozone, neroli, white musk, tuberose and patchouli. And I'm trying to think if there is an iconic vintage Euro-bronzing oil other than Bain de Soleil? You know, for the Saint Tropez tan? Well, if you're of a certain age, you probably know. Update: see a review of Bond no. 9 Fire Island.

Gianfranco Ferré will launch Ferré for Men in September in Europe, elsewhere in 2007. It was created by perfumer Pierre Bourdon:

The powdery, woody men's fragrance features a note of black iris, recalling the white iris that dominates the women's version. (via cosmeticnews)