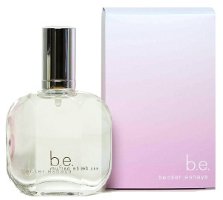 Be was launched late last year by Becker.eshaya, a joint collaboration between John Eshaya and Kristin Becker. The notes are mandarin, rose, pink peony, lily of the valley and white musk.

Be is a soapy-clean floral musk fragrance. The peony is predominant in the early stages, but none of the floral notes really stand out, and the fragrance stays both fresh and close to the skin. It is mildly sweet, with (as advertised) a young, summery, California contemporary-ish feel. It is nothing terribly unusual, but it is pretty and the lasting power is excellent. Available at beautyhabit.

Calyspo Gardenia is a limited edition from Christiane Celle, with notes of fresh citrus, white gardenia, brazilian spices, narcissus, peach blossom, jasmine, vetiver, coriander, vanilla and musk. It starts with gardenia, heady and sweet, but as is often the case, the gardenia part doesn't really last. The narcissus is strong in the early stages — if you don't like narcissus, I seriously doubt that this fragrance will work for you — after that, it is a more indistinct blended floral with traces of green and a mildly spicy kick.

It is pretty and spring-like, and much more to my taste than the Becker.eshaya. I like the Calypso line of fragrances: they tend to be in a casual, nothing-overly-complicated style —what a friend meant recently when she said she needed a fragrance she could wear with jeans — but they aren't, like so many such fragrances, dumbed down with an excess of sugar. I'm going to give the Gardenia a few more tries and decide if it is full-bottle-worthy, but I have a feeling that it is something I'd like in a 10 ml decant.

An aside: Can anyone believe that I haven't bought a single bottle so far in 2006? I can hardly believe it myself, and I hope this isn't another case of denial like I had last year, when I conveniently forgot several bottles I'd purchased. But the last bottle I remember buying is the Osmanthe Yunnan.

Update: did a little nosing around (pardon the pun). I found a 15 ml bottle of Timbuktu that I bought in December, so I have bought something since the Osmanthe Yunnan, but I still stand by my statement that I haven't bought a bottle in 2006.

Meanwhile, availability on the Gardenia, see the listing for Calypso under Perfume Houses.