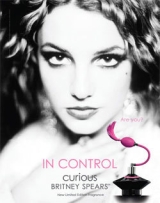 Britney Spears will launch a limited edition fragrance in April, In Control Curious:

The juice, concocted by Quest's Claude Dir, features a top note of loquat fruit; a heart of midnight orchid, crème brûlée, black vanilla bean and tonka crystals, and a drydown of sugared sandalwood and musk.

Britney Spears In Control Curious is in 100 ml Eau de Parfum only.

A few more details on the upcoming Armani Code for women:

Code for Women has top notes of orange, a heart of orange blossom and jasmine and a drydown of vanilla and honey. Carlos Benaim, vice president and senior perfumer at International Flavors & Fragrances, blended the scent over an 18-month period along with Dominique Ropion, senior perfumer at IFF, and IFF perfumer Olivier Polge. (both above via Women's Wear Daily)

Hugo Boss will launch the Hugo Duo for men in February, a limited edition...

...two-in-one fragrance spray, which on one side has the original grapefruit, green apple and pine needle-infused Hugo jus and on the other side has the citrusy and woody Hugo Energise fragrance.

Davidoff will launch the Summer Fizz collection (shown) this spring, with limited edition summer versions of Cool Water, Cool Water Woman, Cool Water Deep, Davidoff Echo and Davidoff Echo Woman, each "updated with a dash of citrus and mint in the top notes". (via moodiereport)

The jus itself is based around the aroma of gin and tonic. The gin accord is created with juniper berries, while the tonic effect is achieved with coriander leaf, green sap and violet leaves. (both above via cosmeticsinternational)